An artists’ haven in pottery city 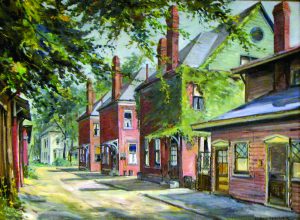 My adopted hometown of East Liverpool was once a bustling pottery city. During its heyday in the late 19th to early 20th century immigrants, primarily from Europe, poured into the area. A surge of talent established East Liverpool as an artists’ haven, with the region featuring over 300 potteries.

One of the immigrants to move here was Hans Hacker.  The young artist and his wife came to East Liverpool from Germany with their two youngest children right before WWII.  At first, the parents had to leave their oldest son behind as he was transferred between German youth training camps. But fortunately, he was able to join his family six years later.

As Hacker integrated into life in the U.S., he became the art and technical director at a local business called, Commercial Decal Company, where he worked for 47 years. In his free time, he created many of his own artistic works.

The importance of knowing your local history

As an art teacher, I looked for inspiration for my students from a local artist who used public buildings, private homes, as well as the Ohio River, as a focal point. I chose Hacker’s paintings because he captured the beauty of what life is like in East Liverpool.

I like to show my students Hacker’s work, discuss the paintings, and then have them paint their own scenes from the surrounding community. I feel it is important to teach the younger generation about their history, especially considering many of the students had parents, grandparents, and great grandparents who had worked in the pottery mills at one time. 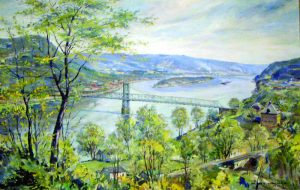 Hans Hacker’s oil and watercolor of the Ohio River

A little while back, at one of the buildings where I teach, I realized the school had numerous paintings and ceramic plates with Hacker’s designs on them.  As I walked through a gallery with my young students and several moms, we were amazed at his work. The kids pointed out buildings they recognized in town while I was drawn to a watercolor depicting the Ohio River with hills on either side.

My students got excited discussing his paintings and once we went back into the art room, I demonstrated how to use watercolor.  We put a loose, light layer down and then left the paintings sit for ½ hour to dry before coming back to add a second layer. I was proud of how well my students used the medium on their first try and believe it was because they were inspired.

A love of watercolor 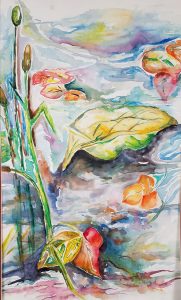 As an artist, I admire Hacker’s watercolors because my own love and mastery of watercolor did not come overnight, taking hours of practice.  I first started painting while in college, but for the most part, was self-taught using the medium.  Over the years, whenever I have had free time for my own artwork, watercolor has been my first choice. I feel free and spontaneous recreating the sensory experience of my surroundings using the fluid texture and colors while applying delicate brush strokes.

My painting, “Autumn on the Ohio River,” is a close-up of a nature scene taken in the fall. I wanted to capture the movement of the water, the color of the leaves, and the light coming through.  I love the Impressionists style.  It’s taken years to incorporate my feelings and emotions into my work but once I started doing so, I bonded with my paintings.