Valentine: Excerpt from Easy Street: Based on my mother’s memoir 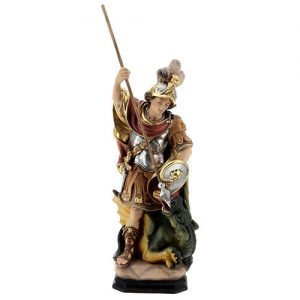 Without averting her eyes from the tabernacle, Baba brushed the top of Diane’s head with a kiss. The beads of her rosary slid through her knotted fingers, click, click. Over and over, she murmured her prayers—swaying side to side—ever so slightly.

For the rest of the service, Diane sat still. But then every few minutes, she’d slowly lift her gaze high enough to study the statue of the sainted warrior towering on the wall to the left of where they sat.

The figure was Saint George. The knight’s armor was impressive, but Diane couldn’t keep her focus off the beast gasping and slithering under the saint’s piercing sword. She thought the creature coiling its body around the soldier’s legs might be a dragon. But then while kneeling for what seemed like an eternity during the Eucharistic Prayer, Diane decided the beast’s red eyes, jagged teeth, and forked tongue made it the devil.

When mass was over Diane grabbed Baba’s hand. She held tight, ensuring she’d make it safely past the Satanist snake, as well as accompany Baba back to her house. The technique worked. Baba led Diane past the aisles, nodding, and greeting the other patrons.

“Dobré ráno,” Baba repeated as she walked out the cathedral’s doors in the direction of her little two-storied house on Dolloff Road.

Baba lived with her husband, Valentine. Their home was just a few blocks from the church, as well as the tavern where Diane lived with her parents and little brothers. When they arrived, Baba made Diane a second breakfast of homemade kreple filled with lekvár and a mug of coffee that was mostly milk. As they ate, Diane watched her grandpa sit on a bench near the coal stove. He had nodded when they walked through the door but hadn’t said anything else. At least not to them. He just sat, whittling a piece of wood with a small sharp knife, coughing, cursing, and spitting black phlegm into the spittoon next to the stove.

The adults never spoke directly to Diane about certain aspects of life, including some things that happened in the old country. But she heard plenty when they got to talking and forgot she was present. Grandpa’s full real name was William Griglak. But because he was born so close to Valentine’s Day, Valentine or Valent, became his nick name. People would also whisper about her grandpa’s childhood in Slovakia. Even in the Cleveland’s ghetto, the scandal surrounding the circumstances of his birth had followed him over the Atlantic. 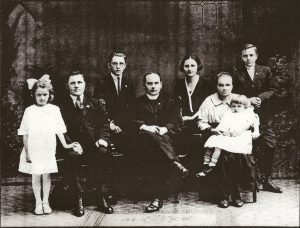 Diane understood enough of the gossip to realize that not only villagers from the old world had shunned her grandpa, but that the ostracization continued in America. Furthermore, she had overheard the reason for the black stain on his character; the burden of a mortal sin he’d carry for life—he was the child of a handsome Slovak priest and a beautiful farm girl.

Valentine had struggled to have the same life as any other child growing up in the mountainous village near the Polish border. But to no avail. So, from what Diane heard from her relatives, the town’s priest paid for Valentine’s passage to America.

With hopes for a better life, at age 18, Valentine had sailed out of the seaport in Bremen, Germany, to Ellis Island, New York. Diane had read about the jobs promised to immigrants in the Czech, Slovak, Polish, and even Russian newspapers, published in Cleveland’s ethnic ghettos. And growing up near McLaughlin’s steel plant, she also understood that to fuel the growth of the Rustbelt cities located in the Northeastern United States, coal was in high demand. So, like thousands of other immigrants, her grandpa travelled to Pennsylvania to work in the mines outside of Pittsburg. 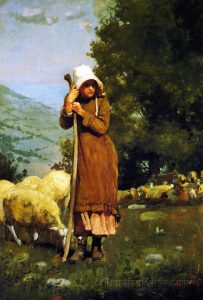 Though the work supporting the Industrial Revolution was grueling, America still offered opportunities that never existed for the working class in Europe. Valentine also found love in the foothills of the Appalachians with an immigrant girl who accepted him despite the societal blemish still weighing heavy on him. That young woman, who also grew up hiking the grassy hills of Slovakia, herding her family’s goats, was Maria—Diana’s Baba.

Valentine and Maria married in the land of opportunity, but they longed for the old country, romanticizing the culture of their childhood and what could have been. So, they decided to sail back to Slovakia and establish their own farm in the shadows of the Carpathian Mountains. There, they had started a family. But Valentine’s banishment persisted, preventing him from fully realizing his dreams and a future for his children.

Consequently, the Griglaks tried their luck again in America, with Valentine travelling ahead of his family to secure a job back in Pennsylvania. Maria followed six months later with their kids, Anna, Rudolf, and Stephen. For first few years they lived outside of Pittsburgh in a town called, Brownsville, where Valentine continued working in the coal mines. 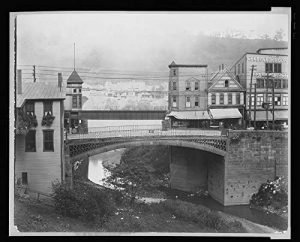 Like most migrants, Valentine and Maria worked hard to scrape out a living. At the same time, without modern amenities and medicine, they also experienced the heart break of having to bury two of their babies because of disease, as did many families of all backgrounds at the turn of the century. 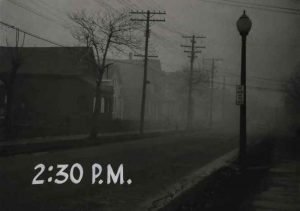 East 49th near Barkwill Ave. Dark with clouding by pollution in the afternoon on-Jan. 9, 1952. The Plain Dealer Historical Photograph Collection.

Valentine and Maria did have two more children that survived early childhood—two daughters, including Diane’s mother, Stephanie and then her sister, Mary. However, Valentine’s own health deteriorated working in the toxic environment. He lasted only a few years in the quarries before developing a cough so bad, he could no longer work. 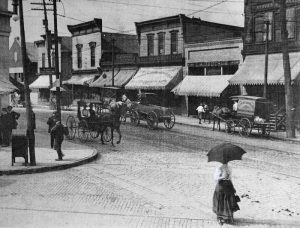 So, Valentine and Maria moved with the rest of their extended family to work in Cleveland’s steel plants. But instead of factory work, the couple opened a small grocery store where they sold ethnic products. Unfortunately, Valentine remained sick, and they were unable to sustain the business. So, Baba provided for the family after that, taking in newly arriving immigrant boarders on the second floor of their home, while also supplementing from her vegetable and herb garden.

Diane’s eyes opened wide in response to her grandpa’s swearing, but she continued to look straight ahead. She dared not look at him. Out of the corner of her eye, she saw Baba’s blue skirt leaving the kitchen. Diane licked the remnants of the prune filling off her fingers, swung her legs forward to hop off the chair, and followed her grandmother.

Baba made her way down the cellar to get sauerkraut, stomping her feet to scare rats that may have been lurking. Diane crept behind and watched her grandmother reach into the barrels to scoop out the pickled cabbage. The fermented aroma followed them as they walked back up the lopsided stone steps and into the kitchen.

Next, they went outside to pull the linens from the line that had dried in the morning sun. Diane stood in Baba’s Victory Garden between the rows of beets and cabbages while her grandmother folded the sheets. She asked for a story, so Baba told her about the twelve sons of Jacob. She made Diane recite back to make sure she was listening.

When Baba finished, Diane trotted after her, back into the house and upstairs where she had several rooms for borders, Diane pestering her to tell more tales the whole way. Once they got into Baba’s bedroom, Diane jumped onto the bed. As Baba put away the linens, she began telling a colorful version of one of Leo Tolstoy’s stories.

Diane lay on the bed still listening. She put her head on Baba’s oversized down pillow and ran her hands underneath until she felt the smooth beads of her grandmother’s rosary. Next to the bed, Baba’s nightstand had a box of tissue, cough drops, pictures of saints, and a little bottle that read “Pain Killer.”

Baba was telling another story by Anton Chekov, when Diane picked up the bottle to read what was on the back.

Baba stopped, turned towards Diane, and shook her head.

“Ne.” She insisted the peddler wouldn’t trick her

Baba only spoke Slovak and the only book she read was a leather bond Bible written in the language of her homeland. Though Slovak and Czech were Diane’s first languages, she had quickly learned to read, write, and speak English once she had started school. But Baba was Diane’s favorite person in the world, and nothing could replace her grandmother’s masterful storytelling. So, Diane didn’t say anything more about the pain killer. 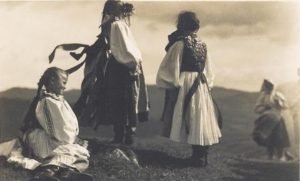 Slovak girls in the hillside of the Tatra Mts.

Later that afternoon, Baba’s sisters, Anna, and Elizabeth stopped by. They had come to invite Maria and Valentine to Elizabeth’s for dinner. Of course, Diane could come with them. The older ladies ushered Diane between them, and linking arms, the four of them walked in time, starting with their right foot. 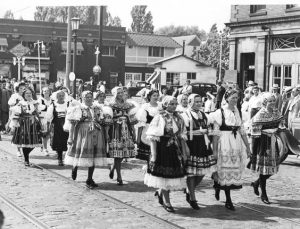 The warm sun had overcome the chilly start of the day. As they marched, Diane noticed the crimson brick roads had dried to a rose color and the blackened cement sidewalks had turned to a smooth dove surface. The breeze had also changed directions so instead of the acrid haze from McLaughlin’s steel plant blowing through the Slavic alleys, the earthy scent of spring filled the air.

Once the reached McBride Street, Diane skipped in front, leading the way to her Great Aunt Elizabeth’s back porch. While Baba and her sisters prepared a picnic for them to eat next to Elizabeth’s Victory Garden, Diane sat in the glider swinging back and forth. Within no time, out came the sisters with trays of coffee, homemade bread, thick slices of ham, and kolačky stuffed with lekvar and cheese.

Diane knew a good story was coming when she heard Grandpa Valentine’s coughing from a distance. She could hear grumbling and laughing of several men’s voices. He and her great uncles were coming to join them. They made their way straight to the back porch, each sitting in their favorite wooden chair.

Grandpa Valentine leaned back, breathing deeply, but this time, not coughing.

“Remember the evergreens after a rain on the Tatra Mountains?” He said in Slovak. 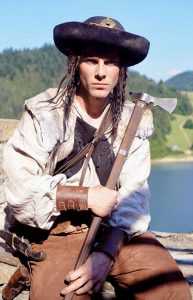 Baba smiled and joined in reminiscing, talking about Sokol, the village she grew up in southern Slovakia and how she was a shepherdess. Diane sat next to Baba as her grandmother became animated describing how they were related to the Slovak Robin Hood, Juraj Jánošík-  the handsome young outlaw who stole from the rich to give to the poor. 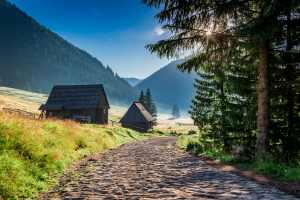 In the distance Diane could hear the bells of Our Lady of Lourdes church begin chiming. She closed her eyes, still listening to Baba—the petals of the apple tree blossoms surrounding the porch landing softly on the top of her braided hair.