An enslaved valet’s contribution to America’s fight for Independence 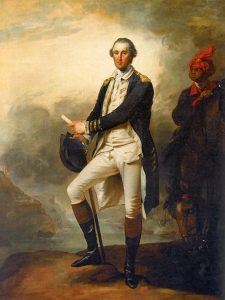 William Lee in stylized dress in background of a George Washington portrait, by John Trumbull, c. 1780. Courtesy The Metropolitan Museum of Art.

Enslaved people contributed to America’s victory over the British in the Revolutionary War, including George Washington’s valet, William (Billy) Lee.

Though documentation of their service is scarce, existing research shows some African Americans supported the cause for obvious reasons—they were hoping the words written in the Declaration of Independence would eventually apply to them.

For example, Rhode Island recruited enslaved Americans, offering freedom for their service. As a result, of the 225 soldiers in the First Rhode Island Regiment, 140 were Black, with the unit helping secure a major win in the Battle of Yorktown in 1781.

Still others had no choice, like Lee, purchased by Washington in 1768, and who served at the general’s side non-stop through seven years of fighting.

Though little is known about the daily lives and achievements of early Black Americans, historians like Jesse MacLeod, associate curator at Washington’s Mount Vernon, can glean information about Lee because of his relationship with the general.

In addition, both had a commanding presence with the two athletic, expert horseback riders well-known throughout the colonies. As a result, Lee became a minor celebrity, with visitors to Mount Vernon seeking him out after the war and multiple historical references of him.

Mary Thompson, another long-time historian at Mount Vernon, paints a picture of Lee based on these accounts.

“The primary reason we remember Lee is because he accompanied Washington to the American Revolution in 1775 and, like Washington, except for two brief stops on the way to and from the siege at Yorktown in 1781, did not return home to Mount Vernon until Christmas Eve of 1783,” she explained.

George Washington Parke Custis’ (Washington’s step-grandson) correspondence also detail Lee’s movements during the Battle of Monmouth in which Lee led a corps of valets on horseback, scouting the battlefield: “Here Billy halted…and, having unslung the large telescope that he always carried in a leathern case, with a martial air applied it to his eye, and reconnoitered the enemy.”

“In addition to his regular duties as a body servant, Lee was entrusted with Washington’s ‘most precious papers,’” Thompson stated. This meant he was responsible for the general’s sensitive documents, including maps, strategic battle plans, and personal letters.

Thomas further described how much Washington trusted Lee: “Years later, when Washington publicly refuted the authenticity of forged wartime letters, Lee was an integral part of his defense. In a March 3, 1797, letter to Secretary of State Timothy Pickering, Washington noted of the forgeries, ‘they are said by the editor to have been found in a small portmanteau which I had left in the care of my mulatto servant named Billy, who it is pretended, was taken prisoner at Fort Lee, in 1776.’ Yet, Washington asserted, it was well-known among his staff and troops, ‘My Mulatto Man Billy had never been one moment in the power of the enemy.’”

Historians also purport the bond between the two men influenced Washington’s evolving beliefs on the institution of slavery. Born owning enslaved people, Washington’s attitudes progressed to the point he no longer bought and sold people, keeping families together and eventually freeing them in his will.

The years at war had the greatest impact though, with Washington granting Lee freedom and a stipend for life.

“…And to my Mulatto man William (calling himself William Lee) I give immediate freedom; or if he should prefer it (on account of the accidents which have befallen him, and which have rendered him incapable of walking or of any active employment) to remain in the situation he now is, it shall be optional in him to do so: In either case however, I allow him an annuity of thirty dollars during his natural life…& this I give him as a testimony of my sense of his attachment to me, and for his faithful services during the Revolutionary War.”

“Lee remained on the estate until his own death in 1810 and is believed to be buried in the enslaved cemetery at Mount Vernon,” MacLeod said.