Slipstream Flash Fiction for Halloween: “On leave in the Vosges Valley” 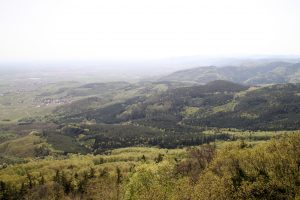 On leave in the Vosges Valley

Mediterranean winds ventured into the Vosges valley and pushed through the mist that draped over acres of junipers. The waves of warmth caused my pink cardigan to itch, so I pushed the sleeves above my elbows. Damp weather was common year-round in Europe, but finally, sun was in the forecast. “We are in for a treat,” I thought as the fog dissipated. I unrolled the window, allowing the fragrance drifting from lavender fields to caress my face.

We were on holiday leave. My husband, Eric, was a soldier assigned to a command in Germany. He had been researching his genealogy and discovered relatives had immigrated from the Alsace-Lorraine region. So that spring morning, we decided to visit his ancestral home. I had mapped our trip along the scenic Route du Vin. The historic highway began in Strasbourg and passed through Riesling vineyards and medieval villages south of Colmar.

The drive from our quarters had taken a couple hours and the back seats of our SUV were beginning to shift. Our three boys were restless.  An impressive castle loomed ahead at the foot of the mountain range—its strategic position overlooking fields brimming with the promise of honeysuckle grapes. “Let’s take a detour,” I piped.

Without hesitating, Eric turned towards the stronghold with a gleam in his eye. After driving up the steep lane to the fortress, he revved the engine one last time and parked in a narrow spot. The boys tore out of their seats and raced to the entrance. I had told them weapons and torture chambers filled the dungeon of Haut-Koenigsbourg. I jumped out too but waited for Eric to arrange his backpack. Years of military service had instilled a sense of constant preparedness in his routine and habits, especially since 9/11.

We reached the ticket booth where the kids were standing at attention. They were pretending to be knights, ready for battle. Several older women sitting on a bench were watching the boys. I couldn’t tell if the ladies were amused or annoyed by the adolescent antics. One turned to face me as I approached. Her sharp blue eyes matched the babushka tied under her chin while the corner of her mouth turned up slightly. I assumed she smiled and addressed her, “Bonjour madame.”

“Oh…Grüß Gott,” I corrected myself. She lifted her chin in a stiff nod before focusing back on the boys. So did I, realizing how American they looked in blue jeans and ball caps. 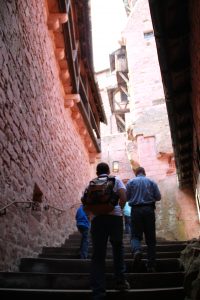 Once the ticket agent opened the gates, we meandered into a courtyard billowing with puffs of smoke filled with the scent of sausages. Picnic tables rested on patches of grass and men stood next to kegs, waiting to serve tourists. The boys let out a whoop, anticipating a picnic. After a discussion though, they decided to search for weapons first.  I followed as they charged to the tunnels below the tower, but not before hearing a loud grunt from behind. I glanced back to see a man duck his head as if he were coughing. His friends looked down too. I noticed they wore boots—boots covered in mud.

I caught up easily to my family because their race had ended abruptly. The entryway leading underground was pitch-black.  Eric said he would scout and led the way with a flashlight while the boys clambered behind. I trailed as we trudged through the dank passage, navigating slippery rocks and sharp turns. Eric mumbled something about a, “useless map.” Cobwebs draping the walls clung to my wrists while the flashlight illuminated a massive one right before it hit my face. I ducked and placed my hand on the opposite wall for support. Whatever I braced against, gave way. I caught myself and straightening my legs, pushed against the wall with force. It was door. Daylight poured into the tunnel.

I was about to step out when I felt Eric’s hand grasp my waist. At the same time, he extended his other arm, preventing the kids from plummeting down the cliff before us. We stood in shock while our oldest, Danny, voiced what we were all thinking, “What the hell?”

A mud road passed though the valley where pavement should have been. Fog fell from an endless cloud.  A whistle echoed, followed by a horn that sounded like a duck. Without speaking, Eric guided us out of the tunnel and unto a ledge that looped around the fortress wall. An overlook with a shelter of black pines gave us cover while allowing us to observe the valley below. I scanned the horizon, looking for the vineyards. Instead, tracks crammed with sludge crisscrossed the barren and pitted terrain. Women huddled near the street. They were facing the sound of pounding boots when I saw the blue babushka.

I was about to tell Eric, but he was giving hand signals directing us towards the parking lot in silence. After bobbing through underbrush, we reached the entrance. There were no vehicles, only a thicket of crabapples. We huddled under the thorny trees. The boys did not say a word. They just watched their dad, waiting for his direction. A sudden stench of diesel and rot rose from the ravine beneath the castle. The drumming grew louder. From over the ridgeline soldiers appeared. They were goose-stepping to repetitive whistling. Red arm bands displaying the black spider swung in unison. Eric shifted his backpack behind me. The new growth on his chin prickled my cheek as he leaned to my ear, whispering, “Here’s the course of action…”