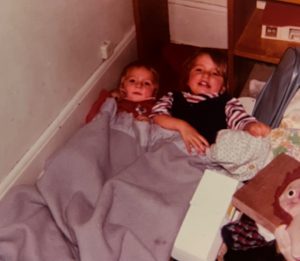 Liz, with baby sister Ruth, taking a nap with dolls in living room- growing up in Cleveland Heights.

Although she has just passed her first birthday, her personality is dominant enough to describe. She is the only daughter whose name fits her size. In looks, she resembles the two blood sisters who proceeded her. No one could mistake those fierce blue eyes and honey colored hair for any other than a Martin and a Slovak.

Like Margaret and Elizabeth, Ruth hardly weighed more than fifteen pounds at the end of her first year, but her little body is as sturdy and straight as an arrow shot from the bow. She stands with her legs wide apart, makes three or four steps, and stops to regain her balance before she completes another set of three. If anyone tries to distract her, her eyes flash blue fire and she shrieks like a pole cat. Her Daddy, in fact, calls her that, since he claims she is more like a wildcat baby than a human baby. 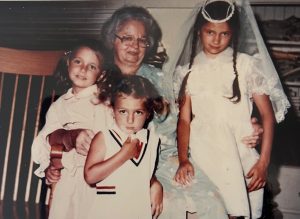 Her mother would never use the adjective “content” to describe her. Happy she may be, but Ruth must see and hear everything, as she struggles to be a vital part of all family activities. Ruth’s position in the family may well determine her personality. She fears none of us. If one of her brothers or sisters tries to lovingly tease her, she strikes out with her fist and yells in anger. Her fierce determination is a facsimile to her older sister Margaret. 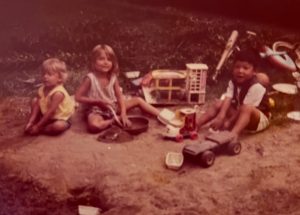 Liz and John, inviting Ruth to play in the sandbox on an early summer morning. Cleveland Heights.

The attitudes of the children toward Ruth are beautiful to see. I steeled myself for sibling rivalry when I found out another baby was on its way. None of my fears were realized. The older children are continuously delighted with her miniature parts, her teasing smile, and daily accomplishments. Paul, her oldest brother, finds great solace in Ruth’s company. When he has exhausted himself fighting with the other children, he retreats to heal his soul. He leads Ruth by the hand about the yard. He has discovered how to make her laugh with silly antics that only babies appreciate. Paul is the most tender and gentle with her, though he is the scourge of other children on the street. 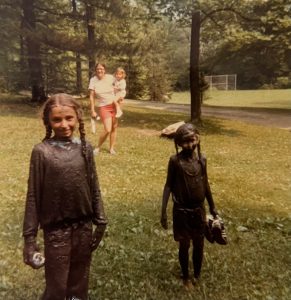 Liz showing Ruth where the famous mud hole was at at Camp Christopher, Bath Ohio.

Cathy and Margaret are charmed by Ruth’s tiny proportions. Elizabeth and John like to rub their faces on Ruth’s hair, and arms, and legs. They are happy with her softness. Margaret, struggling to contain her overflow of affection to one syllable finally dubbed her, “Ruthika,” and she is called that by all the children.

Ruth reciprocates their love for her by looking eagerly toward their sounds early in the morning. If, after her nap, they are all out playing, she looks for them about the house, her babbling sounds obviously containing the intonation of inquiry. Her right eyebrow arches itself automatically, a family trait that is so endearing when seeing in a little one. 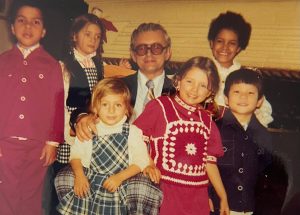 Paul and Margaret next to dad, along with Cathy, Liz and John, with Ruth in the middle.

Her presence among us is the focal point of love, drawing us away from petty squabbles and needless worries. 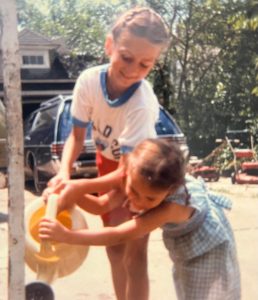 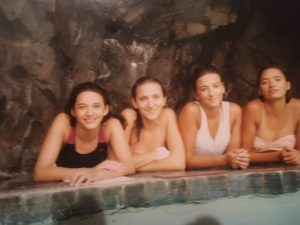 Ruth in the white halter top, with sisters, Sarah, Rachael, and Margaret 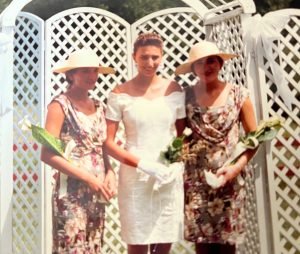