Rainbows symbolize hope. Hence, why rainbow babies exemplify a promise to parents grieving the loss of a prior infant or unborn child—helping overcome the heartbreak.

Because “when you lose a baby, you develop a permanent psychological scar. It is often difficult to imagine that you can have another baby,” says WebMD.

Not only that, but there is the burden of self-blame, as many other mothers, besides me, have experienced when losing an infant.

I enjoyed being a young mom to my first born, Danny, so much, I wanted to repeat the experience. But after losing my second pregnancy, that loss felt like a punishment.

“Perhaps I took the ease and joy of the first for granted.”

“What did I do wrong? Did I drink too much coffee or wine before I got pregnant?”

“Should I have gone jogging?”

“I should be satisfied I have one little boy.”

“I should be grateful I am alive. If not for modern medicine, I would have died too.”

These are the thoughts that went through my head when recovering from the physical trauma. The emotional healing took longer.

A few weeks later during one quiet morning when I was back at work, one of my bosses told me about the numerous miscarriages and still births she went through before having three little boys. 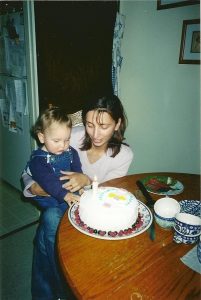 So, exactly one year after suffering that loss during the bleakest time of year, and just a couple of days after Christmas, we celebrated having one of the greatest treasures once again. Eric and I welcome another beautiful baby boy.

Named after Eric’s favorite older relative, his Great Grandpa Tieben, who fought in WWI, the birth of our Samuel Henry felt like a precious gift of recompense.

The sense of darkness started to lift, and I finally began to heal.

So sleepy though, Eric and I had to set an alarm clock every two hours to feed our sweet Sammy so he wouldn’t starve himself. I also sang—constantly. The reason being, the emptiness of that year in purgatory had lifted, replaced by pure joy.

When the nursery songs I sang to Danny got boring, I made up my own words and tunes. Eric would come home from work, looking at me funny, joking he needed to get me out of the house more often. 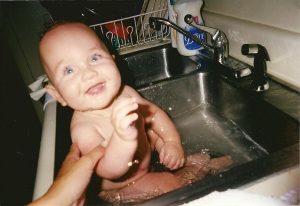 But after three months of singing in a half daze because I was nursing and bottle feeding round the clock, Sam began growing so fast, he was maxing out the growth charts. And then finally, he opened his eyes.

“Look how blue they are.” I shouted to Eric from the bedroom when our baby boy opened his eyes one spring morning.

I was amazed at the sky-blue hue of his iris’—the same color that holds a rainbow when the clouds begin to drift away. 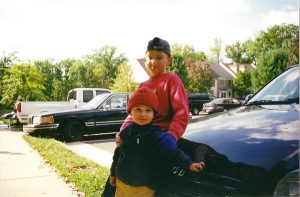 Danny with Sam, near DC.

The following warm days and months in Georgia were a blur. I spent my time homeschooling our oldest, Danny as a 2nd, then 3rd grader, and reading daily to Sam. Danny’s favorite subjects were dinosaurs, Pokémon, and statistics, while I sat for hours doing sticker books with Sam.

I also took weekly field trips with the boys. We visited little museums and nature centers, and attended every cool event we could on base, like the Native Americans’ dedication at the new POW/MIA memorial and the Buffalo Soldiers who rode their horses across the dusty parade fields on Ft. Gordon. 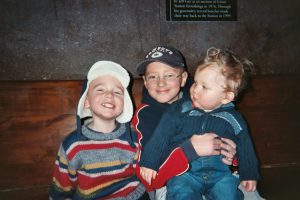 Daily hikes with our dogs in the sandhills took place mostly on orange mountain bike trails. When we walked in neighborhoods, I’d stop as we passed any vehicle because Sam would point and grunt, indicating he wanted to learn about each thing on wheels: the color, the make, the model, and its job. While Danny circled around ahead, practicing his skills on his scooter, Sam and I talked about it all, but mostly about muscle cars and police cars. 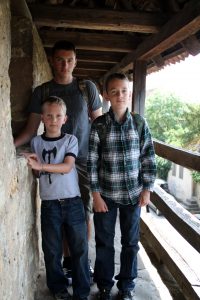 We also found other young families to hang out with at the playground up the hill from our Army quarters. Both the boys loved it, but Sam would get so excited when he knew we were going on an outing, he’d bounce in my arms, even if it was the commissary. 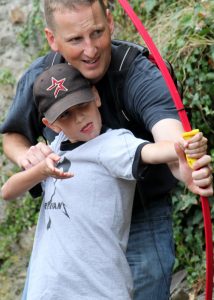 Eric with Sam in Germany 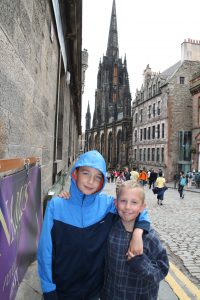 Sam with Joey in Scotland

Funny thing, Sam never did the traditional crawl—he just scooted. And he never once tried to walk on his own until he was 13 months. And then, just like that… he stood up one evening after I had put on a new pair of baby high tops on his chubby feet. 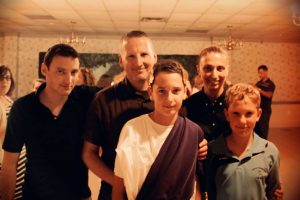 He stood still, collecting himself mentally and getting his balance for a second. He then walked straight as an arrow, out the front door, down the driveway, to the end of our little cul-de-sac, and continued to walk without turning back, all the way down the street to the end of the neighborhood. At least half a mile. 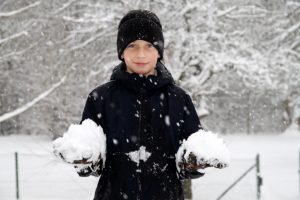 Eric had been home early that evening. He had followed close behind Sam while I stayed out on the back deck to watch them both for as long as I could as Danny got ready for football. 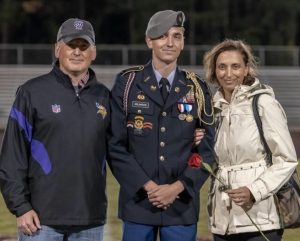 But Sam never looked back to check on any of us. Not once. He didn’t faulter either. The toddler stride was as good as a one-year-old could muster. With the pose of a Soldier, shoulders set back, knees coming up slightly as if in a march, but not quite, and arms swaying slightly so to keep his balance, with his little chin up. 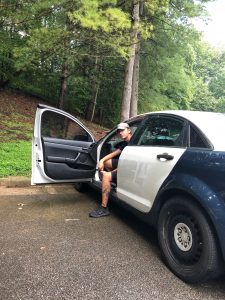 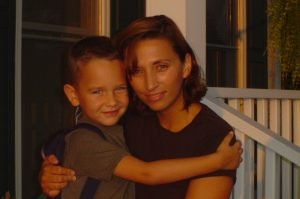 Liz with Sam at Ft. Bragg, first day of school. 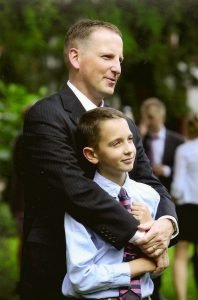 Eric with Sam in Germany

Sam’s fierce blue eyes looked straight ahead as he walked with a purpose towards the sun just over the horizon.