Ruth was to be our last baby.

But truly, we could not stay with that.

Rachael was our second “last” baby. Well, we all know about that.

Rachael was our singing baby. She would cup her bare feet in her hands, roll back and forth on her back, and sing like a bird, loud, joyous, and continuous. Like an oriole. Like a finch. Rachael played in the playpen in the kitchen, but throughout that big house, you could hear the calls and thrills.

Paul was in kindergarten the year Rachael was one. I walked Paul to and from Coventry School, always with Rachael secured to me in a baby carrier. Rachael wore a white bonnet trimmed with lace and ribbons. The ribbons blew in the wind as Rachael sang along the school route. 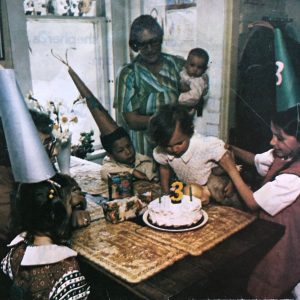 Rachael, with baby doll in arms, on her 3rd birthday. Pictured with brother, John, seated on her right, sister, Elizabeth, standing at her left side, her sister, Ruth, sitting across, and sister, Sarah, in mother’s arms. Growing up in Cleveland Heights, Ohio.

Singing gave way to talking, in her own made-up language. She chattered to us during meals, while she played, in the bath.

Her father said, “It will be sad when she learns to speak English.”

An oft used word was “kapeka.” It referred to ketchup. Rachael sang frequently of kapeka’s merits.

Rachael’s favorite pastime was mothering her dolls. She was often seen with one clutched to her chest. Once, when a favorite doll’s eyes turned back in its head, she wept inconsolably.

Rachael’s singing, talking, and mothering progressed to exploration. Of all our children, Rachael was taken to emergency clinic most often. Trips for stones in the nose, in the ears, and in the knees. Those are the ones I remember. 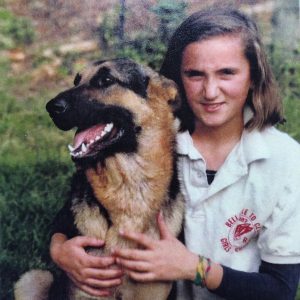 Rachael Joy with one of the German Sheperd father raised as an AKC breeder – childhood in Cleveland Heights, Ohio.

“Rachael, your face stamps you as a child of Eastern Europe.”

Now that my mother has passed on, in her 92nd year, I will see her forever in my “last” baby.

Mother’s traits shine out of Rachael’s eyes. She will accomplish a set goal, no matter what the cost, some call this stubbornness. The fierce determination, perseverance against all odds, is there. This spirt accomplished more good than harm. Its fire burns brightly in her granddaughter, good things continue.

Rachael’s childhood was a challenge to us. But I will never forget the small child who sang her heart out for us and spoke effusively to us in Rachaelesque. That image is imprinted on a mother’s heart.