Published on the website, “We are the Mighty,” is my article on the new Eisenhower Memorial in DC. 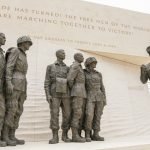 “Humility must always be the portion of any man who receives acclaim earned in the blood of his followers and the sacrifices of his friends.”

Inscribed on the new monument in the four-acre park at the base of Capitol Hill, Dwight D. Eisenhower’s words capture his legacy as General of the Army and 34th President of the United States.

Eisenhower’s speech to British Parliament in June 1945, expressed his profound gratitude for those who fought during WWII. The exert from his Guildhall Address is one of several featured on the monument embodying Eisenhower and the principles guiding his accomplishments:

Retired Airforce Brig. Gen. Carl Reddel, executive director of the Eisenhower Memorial, explained the park is not only a tribute to Eisenhower, but reflects America.

The monument is, “The best piece of evidence America works,” he said. https://www.wearethemighty.com/news/eisenhower-memorial-america-works