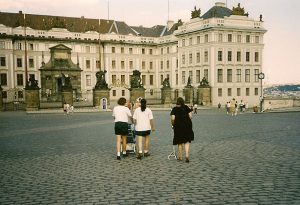 A stroll through the streets of Praha

The drive started in the rolling hills of Bavaria. Fields were lush with the approaching harvest and villages had been painted with fresh coats of pastels. But when we crossed the border into the Czech Republic, the farmlands became dense pine forests and the newly paved highway dissipated into a rough two-lane road. There were no buildings, and no one stopped us from coming across the border, not even a patrol checking for passports. The only indication we were in another country was the landscape and infrastructure fading from pristine farm communities to desolate countryside.

After miles of woods, we hit an intersection. I asked Eric to slow down so we could find a restroom. Shacks stood along the road. They were made from timber scraps and old blankets. When I rolled down the car window a cloud of dust blustered past, filled with exhaust. I realized people were setting up makeshift booths trying to sell anything they could to the tourists trickling into the country. The ware displayed on old benches looked like it had come from abandoned barns. There were chairs with chipped paint, dusty rakes and plows, but no washroom. Eric kept driving. We would find a hidden spot in the woods instead. But when we did, the oppressive odor and paper that dotted the ground under shrubs made it apparent we were not the only ones using the forest as an improvised bathroom.

I sat in the back seat of our wagon with Danny in the middle and my youngest sister on the other side of him. My mother, a teacher, and my 15-year-old sister, Sarah, were visiting for the summer. School started in a few weeks, so we were touring Europe before they had to go back. I was also not able to get my veterinary paperwork done in time when leaving earlier that spring, so my mom had brought my dogs, in addition to years of knowledge. She had spent the summer helping with the baby and teaching me the German language and culture. The one tour she requested was a road trip to the city where her father’s family immigrated before WWI. Prague was only a few hours away and on the warmest day that summer, Eric took leave and we made the drive to my family’s ancestral home.

Th countryside road eventually took us through tired villages as we neared the capital city. Pine trees thinned and while the stone arches of Charles Bridge over the Vltava River loomed in the distance. From afar, the water looked peaceful, but crossing over, white caps peaked up and down in rapid motion. The sparkling sunlight dancing on the waves was an illusion of the potential danger lying beneath the surface. On the other side of the bridge, the skyline displayed towers and spires from a variety of architectural styles built over the centuries. As a former art student, I could spot Romanesque, Gothic, Renaissance, Napoleonic, and even Stalinist designs. And as we drove across the bridge, Baroque statues of elaborately carved saints lined the bridge on either side. They looked like medieval knights still standing watch. Eric drove past the towers built in the early middle ages and found an empty lot right away. Parking was scarce in any European city, so he pulled our blue wagon into a narrow space marked with Russian signs.

Our plan was to spend the day on the parquet roads designed hundreds of years ago. My mother’s family would have worked on maintaining the streets before immigrating to the states. She had been excited to hear from our neighbors in Unterklausen, that our family, the Bustas, were still recognized for their workmanship in the Bohemian region. Unfortunately, she had hip replacements that spring and so our goal was just to stroll through Old Town and around the Prague Castle. Within minutes Eric hailed a taxi. He put the stroller and walker in the trunk while my mom sat in the front. Sarah and I crawled into the back with Danny. There was no time to care about the lack of seat belts. As Eric slid in next to me, the driver hit the gas. Sarah looked at me like she was going to puke. I thought it was from the sudden motion, but then she nodded her head for me to look up. The padding on the ceiling was gone and in its place were photos of topless women. We scrunched up our noses to each other and shifted together. I held Danny even tighter when I noticed the floor was covered in cigarette butts.

While trying to brace myself while holding my baby, I handed the Let’s Go Czech Republic and Slovakia travel book to Eric. The information we had was limited, and I could tell by looking at his face he was making sure we were heading in the right direction. There were no signs for tourists, but my mom suddenly announced, “Zelenina! That means vegetables!” She turned around to look at me. With tears in her eyes she exclaimed, “I can read the signs!” She frequently told stories about her childhood in a Czech tavern, but I did not think she could still understand the language. Neither did she. But she was able to navigate and tell us about the city as the taxi continued. She also kept proclaiming, “This is just like how I grew up!” The cab came to an instant stop when we reached our destination. The driver looked straight ahead, gripping the steering wheel while Eric took out the stroller and then assisted my mom with her cane. As soon as Sarah and I got Danny situated, the tires of the cab squealed. I felt my jaws clench. I took the stroller, resisting the urge to sprint. Sarah scampered alongside me when she noticed our mom was crying. And it wasn’t because of the ride.

I slowed my pace as we made our way through Old Town. My mom wanted to tour the churches where Mozart was rumored to have played, but we soon learned the churches were locked. The city was not prepared for tourism after decades behind the Iron Curtain. So, we made our way to the fortress looming over the banks of the river. The series of intricate cathedrals and palace towers rising above the fortified complex looked like a mythical kingdom. Nothing in the states compared, not even the Rockefeller mansions in Northeast Ohio where I had grown up.

We entered a courtyard first built in the year 800 in awe, walking past the Basilica of St. George and then the Basilica of St. Vitas. The Gothic structure displayed vaulted walls and Baroque towers holding the tombs of kings and its patron saint, Wenceslaus. We continued through the fortified grounds for a couple hours admiring the craftmanship till my mother could no longer continue. Eric said he would get the car and drive her and Danny down to the café next to Charles Bridge, right where we parked. Sarah and I would meet them there.

Old Town was designed for walking, so Eric was back with the car in minutes. But my little sister and I decided to take our time as we made our way on the lopsided cobblestone. We had the fairytale streets to ourselves as we meandered down a narrow alley called Černínská and then reached a church called, Kostel svatého Šimona a Judy. I wanted to stop and listen for a pipe organ like our mom suggested. The Prague Symphony Orchestra played in the cathedral, and I was hoping to hear musicians’ practice. Sarah let out a deep sigh, blowing the thick black curls that had fallen from her ponytail from going into her eyes. Puckering her lips even further than their usual pout she agreed to stop. She was exhausted, so we sat on a stone stoop that ran along one of the oldest thoroughfares in Europe.

Five years had passed since the Berlin Wall came down, but the streets felt empty. A group of women passed by. Their cloths were threadbare and none of them were wearing bras. Sarah flinched. I shrugged looking down at our plain jean shorts and t-shirts, still waiting to hear music. The impressive structures towering on both sides of the street blocked the sunlight from hitting the stone way. With no breeze or wind the storm drain on the other side of the road emitted the dank aftereffects of septic water running through the aged aqueduct system. The city smelled of a thousand years’ worth of inhabitants, a distinct musty odor indicative of old cities in Europe. Despite the clammy stones surrounding us, Sarah and I decided to take off our socks and shoes and enjoy the waning moments of warmth. As we sat there swinging our bare feet, we heard the swelling of a guitar echoing though the alleys. When a slow beat of a drum started in time with the guitar, I knew it was Metallica’s Nothing Else Matters. We both looked to see where the music was coming from. Sarah said in her matter-of-fact tone, “Well, at least some normal person is living in the 20th century.”

By the time we made it to the café, my mom had ordered Klobásy with horseradish, braided poppy seed bread, glass mugs of Pilsner, and a Spezi for Sarah. She was glowing, talking about how she grew up in a miniature version of Praha. She could imagine her family walking on the same streets we had just been on. Her grandparents would sing about their homeland in Praha and how much they missed it. I asked her why they left. She explained, her father’s mother was from Prague and that once she became widowed, she took the arduous journey to America with her seven sons. She did not want them to be drafted into the Army, forced to serve for the Austro-Hungarian Empire they hated.

Later, as we drove over the Charles Bridge heading back to Unterklausen, I leaned out the car window to get a closer look at the saints lined up over the Vltava which rippled a muddy brown. As I looked up at the statues, I couldn’t help but think the twilight sky made them look like shadowy ghosts—like the Dead Men of Dunharrow from Middle Earth in J. R. R. Tolkien’s series, The Lord of the Rings. They were like the spirits of knights from long ago, standing in redemption and fulfilling their oath by guarding the ancient city of Prague. I pulled out the anatomy book I had brought for the drive. I wanted to study for my upcoming Red Cross volunteer work with the remaining minutes of daylight. But as I quizzed myself, I kept thinking about the women in thin clothing, not much older than my sister and I. Thank God my great-grandmother, the widow with seven sons, left for America.