Governor Alexander Ramsey of Minnesota was in Washington DC when Fort Sumter surrendered to Confederate forces on April 13, 1861, marking the start of the American Civil War. The following morning, Governor Ramsey went to the War Department, volunteering 1000 men to fight for the Union cause. These men, organized as the 1st Minnesota Infantry Regiment (1st Minn), would become the first volunteers to heed President Lincoln’s call to arms.

Two weeks later, the 1st Minn mustered at Fort Snelling near the confluence of the Mississippi and Minnesota Rivers, and prepared for war. Men from across southeastern Minnesota gathered at Snelling, including Phineas Leonard Dunham. He was a 20-year-old farmer from Wells, a small village near Faribault.

By July 3rd, the regiment had traveled via steamer and train through Chicago and Harrisburg to Baltimore, eventually billeting just outside of Alexandria, Virginia. While traveling through Chicago, a journalist for the Chicago Tribune noted “There are few regiments we have ever seen that can compare in brawn and muscle with these Minnesotans, used to the axe, the rifle, the oar, and the setting pole. They are unquestionably the finest body of troops that has yet appeared in our streets.”

On July 16th, the 1st Minn and 35,000 other Union forces marched west out of Washington to challenge a Confederate army positioned behind Bull Run creek, defending a vital railway junction near Manassas, Virginia. The Battle of Bull Run would be a shocking defeat for the Union and the first major battle of the Civil War. From Bull Run to Antietam, Chancellorsville, and finally, Gettysburg, Phineas, and the 1st Minn would fight in some of the bloodiest battles of the war.

Arriving at Gettysburg during the second day of fighting on July 2, 1863, the 1st Minn was placed along the southern flank of the Union position on Cemetery Ridge. Union forces in the center of the Cemetery Ridge line were collapsing under the sustained assaults of the Confederate Third Corps. Major General Hancock of the Union II Corps ordered the nearest troops at hand, the 1st Minn, to “Charge those lines!” to buy time for further reinforcements.

With fixed and leveled bayonets, the charge of the 262 soldiers of the 1st Minn broke the Confederate assault and bought crucial minutes for reinforcements to bolster and save the Union line. However, those crucial few minutes came at a devastating cost – more than 80% of the 1st Minn lay dead or wounded along the dry creek bed of Plum Run. Among the mortally wounded was Corporal Phineas Dunham, with a fractured thigh due to a gunshot wound.

Phineas suffered more than two weeks before succumbing to his injuries July 17, 1863. He would never leave Gettysburg. 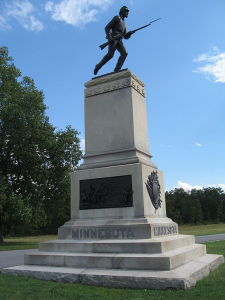 Phineas is buried with his fellow Minnesotans in Section D of the Gettysburg National Cemetery. Like tens of thousands of other Union soldiers, Corporal Phineas Dunham gave his life to preserve the Union and end of scourge of slavery.

Phineas was the brother of Samuel Cowles Dunham, my 4th great-grandfather. Thank you for your selfless sacrifice, Uncle Phineas.

Guest blogger, Col. Eric E. Aslakson, is a Cyber Warfare Officer assigned to Space Force. Originally from Shakopee, Minnesota, he currently lives in the DC area with his wife. They have three young adult sons and in his free time, Eric enjoys researching his ancestry.