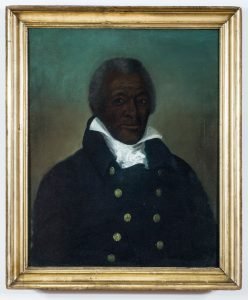 Patriot spy and enslaved African American, James Lafayette, was instrumental in helping defeat the British during the American Revolution.

Despite the British promising freedom to enslaved African Americans joining the fight against the colonists, James volunteered for the Patriots. He risked his life spying, despite any guarantee for his own liberty, let alone compensation.

Known only as James and born into slavery about 1748 near Richmond, Va., he worked as a valet for William Armistead. Once the war started, Armistead served as the state commissary of military supplies in Williamsburg for the Continental army, bringing James with him.

With the British marching into Virginia in spring 1781, the Patriots were eager for information on the invading army. Located close to British encampments, James realized he could use his inconspicuous status serving in clandestine activities to learn enemy activity and intent. As an African American, he could enter both camps with ease, acting as a servant, laborer, or teamster.

So, with Armistead’s consent, James spied for Marquis de Lafayette, the young French nobleman and commander of the Continental army of Virginia. James pretended he was an escaped slave, enabling him to access British officers’ communications, including that of General Charles Cornwallis. Additionally, he relayed messages to other agents working behind enemy lines and participated in a disinformation campaign, feeding false information to the British.

Though no evidence exists, legends claim James was also a double agent. It’s purported he pretended to spy for the traitorous American general, Benedict Arnold, who was in Cornwallis’ camps. As a result, stories credit James for passing on information leading to Arnold’s capture.

Regardless, written accounts reveal James did engage in high stakes espionage. Historians state Lafayette was referring to James in his reports to General George Washington, when he wrote, “Correspondant of Mine Servant to Lord Cornwallis,” “My Honest friend,” and “A Very Sensible fellow.”

The intelligence James smuggled from Cornwallis’s headquarters proved invaluable. By summer 1781, James learned of Cornwallis’ movement to Yorktown with plans of adding 10,000 troops.

Once informed, Washington left New York, meeting up with Lafayette and General Comte de Rochambeau and his French troops. Over 17,000 strong, the Patriots established a blockade around the Yorktown peninsula, preventing British reinforcements and bombarding them by sea and land. The siege succeeded with the British surrendering on Oct. 19, 1781.

After the war, African Americans serving in the Continental army gained freedom under Virginia’s Emancipation Act. But James did not. The law didn’t include spying, so James had to continue enslaved service to Armistead. 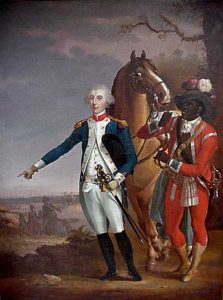 “This is to certify that the bearer by the name of James has done essential services to me while I had the honour to command in this state. His intelligences from the enemy’s camp were industriously collected and faithfully delivered. He perfectly acquitted himself with some important commissions I gave him and appears to me entitled to every reward his situation can admit of. Done under my hand, Richmond, November 21st, 1784, Lafayette.

However even with Lafayette’s affidavit, the assembly refused to hear James’ case. He filed a second petition two years later with the assembly finally freeing James on Christmas day 1786.

To honor his commander, James took Lafayette as his own surname. Then after buying 40 acres in New Kent County Va., he began pushing for compensation, requesting a pension based on his service and “advanced age of three score years and ten.” In December 1818, the assembly granted him $60 in relief and a $40 annual pension for life.

James became a familiar figure in Richmond, riding into the city twice a year to collect his pension. And in 1824 a newspaper ran a story describing James as “a very venerable and respectable free black man,” also reporting James hoped to travel to the city that fall to meet his old commander, Lafayette. The general was coming back to the U.S. on a commemorative tour, celebrating the Revolution’s 50th anniversary.

That October when Lafayette visited Richmond, James was there. Newspapers described the emotional reunion as Lafayette paraded to the capitol square. Crowds lauded the general as a hero when James called out to him. Immediately recognizing James in the crowd, Lafayette halted the procession and embraced him.

James died in Baltimore on Aug. 9, 1830. And though his burial place is unknown, Lafayette’s loyalty and testimony preserve James’ daring actions critical to the eventual freedom for all Americans.

Entry on James Lafayette in the Encyclopedia Virginia