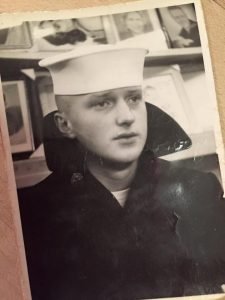 Americans celebrate Memorial Day as the unofficial start of summer. I believe the tradition of having summer fun with friends and family is also the best way to spend the long weekend. Based on my firsthand experiences, many Americans, and even other people around the world, appreciate a major reason why they can enjoy life is because American service members made the ultimate sacrifice ensuring freedom in many regions.

It is understandable most remember military members who have fought in recent wars such as the conflicts in the Middle East since 9/11, as well as those who lost their lives in more clearly defined wars such as WWI and WWII.

But at the same time, it is important to remember those who lost their lives in lesser-known conflicts or in even dubious ways past government officials hid from the public’s attention.

One such group, “atomic vets,” are the approximately 400,000 and 550,000 service members who unwittingly participated in a variety of nuclear tests between 1946 to 1992 according to the Department of Defense’s Defense Threat Reduction Agency.

Many of these service members served in post-World War II Hiroshima and Nagasak, Japan, as well as in atmospheric nuclear tests in Nevada and the Pacific from 1945 to 1962, and underground nuclear testing in Nevada from 1951 to 1992.

Sadly, many of these vets succumbed to cancer due directly from the impact of that nuclear testing before the government publicly acknowledged the experiments.

However, on Oct. 3, 1995, President Clinton finally issued a formal apology to America’s atomic veterans, ordering a repeal of the Nuclear Radiation and Secrecy Agreements Act which allowed them to share their experiences without fear of fines or treason charges. The government also offered financial compensation for those who proved they served in the experimental training.

Unfortunately, in typical pop media culture, instead of televising Clinton’s address, the news had wall to wall coverage of the OJ Simpson verdict for days. Very few people, including our family, knew of the secret missions that fatally sickened hundreds of thousands of individuals. 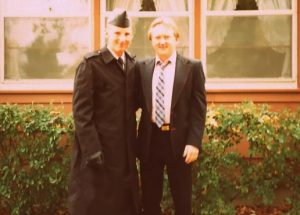 Eric, a young private, with his dad in front of thier home in Shakopee, Minn., fall 1986.

Stationed in Vilseck, Germany, with Eric assigned to a Bradley Platoon, Eric and I had little news with the one channel on AFN TV and radio.

I am not sure if it would have made much difference, because there would have been nothing anyone could have done to prevent his dad, Ozzie, from getting sick and dying a decade later Aug. 3, 2005.

Ozzie served in the Navy on the USS Taylor from 1958-1962, and included his participation in the deadly atmospheric nuclear testing near Johnston’s Atoll in the Pacific Ocean.

Not until years later, when his kids were young adults, did he talk about the training, describing how when he and the other sailors witnessed the nuclear testing going off standing on the deck of their ship, they just ducked and covered their eyes—the only guidance given. He said the explosion was so bright he could see the bones in his arms.

It wasn’t until he kept getting sick and finally went to his local VA hospital in 2002 that he realized he had cancer. After the unexpected diagnosis, he passed away two year later at age 63, the summer Eric deployed Bagdad.

Those few years for Eric and I and our three boys included four consecutive moves, a deployment, and then home on emergency leave, and back to the deployment. I am not sure how we got through that time other than the incredible support of both our families, as well as our military family.

Eric was able to say goodbye to his dad and help his mom for a couple of weeks, as did me and the boys… though mostly I just did my best to keep things as “normal” as possible for the kids. But that summer we lost Ozzie while forging though the first deployment- I realized more than ever just how precious and fleeting life is.

So, on this Memorial Day, I am taking the time to remember Ozzie, the sailor who lost his life on a less than glorious battlefront. As with all those we’ve lost, it’s more important to celebrate the little things that made them who they were. 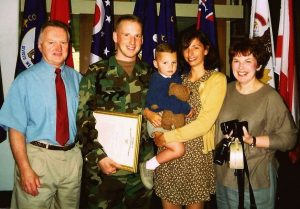 Ozzie (and Gaynor) was always caring and warm when I crashed at his home as a young college kid. Too far from my own home in Ohio for short breaks and long months off between semesters, I never had to worry about a place to stay. He even helped me pass my first drivers test and get a legitimate license. (which is a story for another time).

Between duty assignments and with Eric overseas, Ozzie also helped take care of me and baby, Danny. When I slept in till noon after numerous long nights, he’d walk and feed my two big dogs before going to work. He would never turn down a laugh when I stopped by his frame shop for a quick chat later in the day with Danny too.

Patient and good humored, he also taught me how to drive a stick, so I knew how to drive the wagon waiting for me on the other side of the Atlantic before heading off to the middle of nowhere in Bavaria Germany with my little guy. 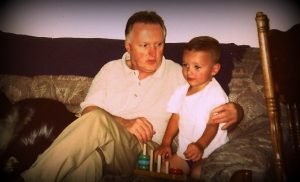 And as soon as Danny was old enough, they were best buds, whether playing ball or watching construction trucks and trains for hours while eating doughnuts. No matter what he was doing, he would make real time to spend with anyone, especially the grandkids. 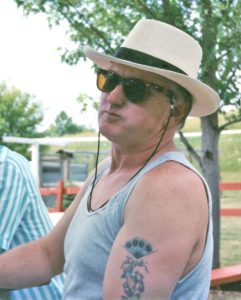 This is how I’d like to remember Ozzie and will continue the tradition of spending the weekend doing the things he loved most and what matters most- being with family, enjoying the kids, and doing quintessential American summer activities.