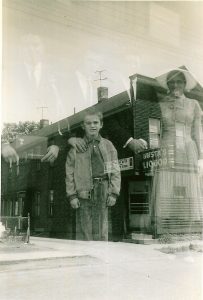 Busta children superimposed over image of the Busta tavern, owned by Ed Busta

“Where are you going little girl?” People called as she skipped by.

“Edjem doma,” she replied. They knew exactly who she was and where she was going. She was Ed Busta’s daughter and everyone knew her father. He was a popular tavern keeper and she was just like him. Diane continued to skip down Broadway with the heels of her Mary Janes clicking on the sidewalk. She made her way past Our Lady of Lourdes, circling behind the church to the elementary school. She crossed Dolloff, skipping till she reached the shotgun style building. At the entrance of the brick structure, she looked up to see the sign swinging in the breeze that read, ED BUSTA’S TAVERN.

The front of the tavern consisted of a large window that acted as a mirror when the sunlight hit just right. Usually she would watch the traffic when looking in the glass, but instead she stood a few seconds to study her reflection. The image on the window revealed a thin girl with long legs and a mouth that exposed everything she was thinking and feeling. She longed for blond curls like Shirley Temple, but instead her black hair was cut in a bob. A red ribbon matching her red and green plaid jumper held back her straight locks. Another oversized red ribbon cinched her jumper around her waist. She straightened her Peter Pan collar, as well as the three buttons on her blouse before wiping the dirt and dry blood from her knees.

Diane and her friends had been playing on the fire escape at Lourdes and then at the public school, but they had gotten bored. She knew they were not supposed to go down to railroad yard—yet they went, taking the alley to the tracks where they played Kick the Can. She had tripped over a rail. The scrapes hurt, but she would never tell her mother, nor would the other kids. They knew it was dangerous. Most of children did not speak English, including Diane. Instead they spoke Czech, Slovak, or Polish. However, they had no problem understanding each other and they would spend hours playing in the industrial neighborhood hugging McLaughlin’s steel plant in downtown Cleveland.

Diane took a step into her father’s tavern, pausing a moment. Tobacco and beer hung in the air, along with the aroma of her mother’s goulash soup. She walked across the freshly scrubbed wooden floor and past the tables and chairs. The room was rarely that clean and quiet, making her tiptoe like she was in a church. As she entered the kitchen, she spotted two fat loaves of Bohemian rye on the counter cut into thick slices. Next to the bread were also two cheesecakes bought from the bakery truck that morning and a pot of bubbling coffee. Diane’s mother was facing toward the counter as she unrolled a couple chickens wrapped in newspaper. Diane stood watching as her mother started singing: 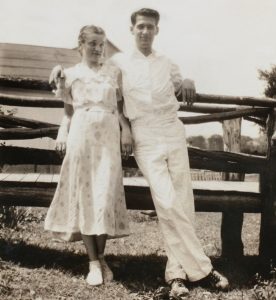 Mesmerized, she observed her mother pull the innards out of the birds and chop off their feet. Unfazed by the messy preparation, she tapped her foot in time with the lyrics of her parent’s favorite song as her mother recited:

Her mother continued humming as she held the chickens over a gas jet, ridding them of feathers. The singed fluff was acrid, but the thought of stuffed chicken and homemade dumplings made Diane’s stomach growl. Not wanting to interrupt she kept quiet watching her mother’s light brown hair float in wisps from the bun at the back of her neck. The hair pins could not hold the fine hair as she worked in whirling motions. She pivoted while putting the birds to roast in the oven before turning her misty-green eyes towards her daughter, saying, “Diane, go wash up before dinner.” But first, she allowed Diane a snack. There was a huge pickle sitting on a small piece of paper on the countertop near the icebox. Diane picked it up and took an enormous bite, licking her fingers as juice trickled down her hands.

When she finished her sour treat, Diane marched towards the stairs leading to the living area over the tavern. As she hiked up, she ran her hands over the wooden banister until reaching the top. The wide doorway opened into the upstairs apartment where light splashed across the floors and danced its way through each of the rooms. She paraded into the main room where her grandmother, Baba, was sitting by the front window holding her baby brother, Jimmy. Her other little brothers, Eddie and Tommy, were sitting at Baba’s feet playing with blocks.

Baba wore her silver hair in the same fashion as Diane’s mother. She was rocking while enjoying the view of Lourdes where a wedding procession going on. The bell tower chimed. Diane did not know who was getting married but knew she would hear about it later. Her grandmother noticed her standing in the doorway and asked for a hug. Diane ran to her, giving her and her little brothers a kiss, leaving salty remnants on their cheeks. She did not care to see more. Weddings were pretty to watch, but all Diane could think about was what would go on downstairs later that night.

The remaining rays of the day twinkling in the stained-glass windows across the street reflected a rainbow of colors onto the tavern. It was Saturday evening which meant Diane’s father was home having caterers deliver duck dinners to his pub. As the first costumers arrived, piping from an accordion alerted her that there would be dancing along with beer flowing from the tap that evening. Her father let out a whoop and called, “Stephanie!” Diane was still in her bedroom, but when she put her ear to the floor, she could hear the quick stepping of feet and the bass sounds of a musician warming up for a long night. She knew her parents were dancing.

When Ed and Stephanie were teenagers, they danced in competitions held at local schools and the Euclid Beach Ballroom. The styles in music would change, but whether they danced the Jitterbug, the Boogie-Woogie, or the Two-Step, they would win. Stephanie had to quit school when she was 12 to work as a file clerk and then at age 14, for the Credit Bureau. Ed had to drop out of school at the same age. After finishing seventh grade he was hired at a tool and die store, yet they found time to practice and enter dance contests. Then the war started, and Ed worked double time in the airplane factory and munitions plant before he was able to buy the tavern. War time was serious, but once they owned the tavern, they could be dance champions again. Diane daydreamed they were at least. She loved watching them dance and so did the people who came to eat and drink in their Czech tavern.

As she lay on the floor of the upstairs apartment, Diane could hear men start to sing. She heard her father join in. He was the president of the Praski Pepiki, the Jolly Boys of Prague. They sang about Ziska, the old neighborhood where they had immigrated from inside the city of Prague. They sung about how much they missed living in Ziska, but the song did not end there. Their lyrics included how life in America was better—for those that worked hard, anything was possible. They had never experienced this hope in the old world. They then started singing Czech folk songs and a loud pounding began as people waltzed. Diane wanted to see them dance. She also knew as the night went on and people drank, they would also start swearing. She wanted to hear so she could use the bad words to impress her friends. Baba was busy with her brothers, so she crept down the stairwell to the cheerful noises below.

Diane entered the bar room filled with dancing and singing, crawling. Smoke hung in the air, helping cloud her movements. Tobacco swirled above along with the scent of beer, duck, and perfume from women’s dresses. She caught a whiff of Ivory soap—the scent of her mother’s scrubbed hands. Her parents were waltzing with the crowd, so she scooted along the floor, hiding under a table near the kitchen. She sat in her cubby, waiting to hear bad words as the music and thumping made the wooden planks vibrate.

After several minutes the music ended, and she heard footsteps coming towards her. She held her breath, straining to hear. There was no foul language, instead she realized it was her parents talking. They were taking a rest, sitting at the very table Diane was hiding under. Her parents were discussing a place called “Easy Street,” but she didn’t understand what they meant. Her father said, “If we keep working hard, we will be living on Easy Street.” Her mother agreed. They continued to chat and sip beer while Diane thought about what her parents had said. She was only seven years old and had no idea where this place was. All she knew was “Easy Street” sounded magical.

Ed and Stephanie got up after finishing their drinks and joined their customers. Diane peeked out from under the table, making sure no one was watching. Without looking at the dancers, she crawled straight to the staircase. Once she hit the bottom step, she jumped to her toes and dashed to the top, running across the living room, and then tearing through the passageway that lead through her parents and brothers’ bedroom and to the last room of the building, her own bedroom.

Diane plopped on her bed and taking a deep breath, snuggled with her down pillows while listening to the night sounds. There was more music. Not just from her father’s tavern, but from a bar called, Bohemian Gardens. A live band played as she imagined her parents dancing. Her mother’s light brown hair was flying with her twirling blue skirt, while her father swung her in his arms to the music from Prague. Just as she drifted to sleep, she heard a muffled, “Itč do pekla!” Someone was yelling, Go to hell! Diane smiled—then quickly apologized to baby Jesus for the swearing and finished by asking that her parents’ dreams come true.