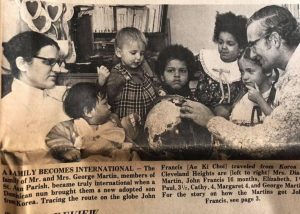 I am relieved to report, that on the eve of his third birthday, John Francis is becoming a naughty boy. For the two years he has been with us, he has been too good. Actually, his passivity is being replaced by demanding requests and plain, old-fashioned mischievous pranks. His basic temperament remains easy going and affectionate, but he is beginning to spice things up by becoming livelier.

The young children in our neighborhood ask me if John talks Korean. None, but he has a good grasp of the king’s English. Any eavesdropper can hear him reciting his repertoire of a score of nursery rimes before he falls off to sleep, or sing his standard hymn, “Abay, Abay Maria.”

His current preoccupation is with moving vehicles. When I take the children on walks, the destination and what we do there is of little consequence to him, but he is enthralled with the cars, trucks, and buses that pass us. If all the bicycles and tricycles in our yard are turned on their side, I know John has been at work, twirling the wheels round and round. 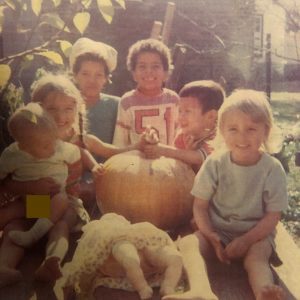 6 of 8 Martin kids, from left to right, Sarah, held by Margaret, Cathy, Paul, John, and Elizabeth. (Two sisters, older than Sarah, but younger than John and Elizabeth, Ruth and Rachael, were napping)

John is a vey affectionate child, but he reserves his most charming smile and caresses for special people. Grandpa ranks highest on his list. When Viola, our friend, housekeeper, and surrogate mother comes over, John shrieks, “Ola,” and from the top of the stairs, runs and throws himself at her with wild abandon. A very important person the John is his baby sister, Ruth. He strokes her soft hair when she nurses, and whispers to her, “You’re my baby.”

John’s outward appearance is somber. His nickname, “Happy Jack,” was given to him by the other children in his pouting moods. John’s pensive brown eyes look out steadily at you from under a Dutch boy haircut. The summer sun gives his skin an orange-brown hue. His round face, and chubby arms and legs, beg to be loved.

Sometimes I find him suddenly standing at my side, or behind me, quietly waiting to be picked up and fondled. If I don’t take advantage of it, he slips away. He was month old when found, in a box on a street in Pusan. My mother’s intuition tells me he was loved in that short time by his mother. It must have hurt to give up a child. 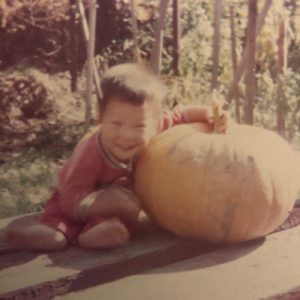 John’s rotund little body is amazingly adept at physical feats. He can climb the jungle gym to the highest rung, and swing and somersault fearlessly. He has no real fears, his greatest desire is to spend more time alone. In a family so large, John does not seem to have enough opportunity to meditate. When the opportunity comes, he relishes it. He scuttles behind a big chair in the living room and spreads all his things with wheels about him, and contemplates them with satisfaction, until a child comes to disturb him. He seems happiest when alone with his toys or sitting on grandpa’s lap. 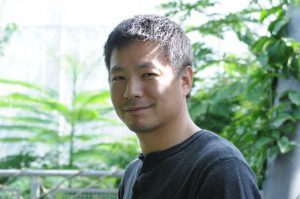 When he becomes older, he will probably be a diligent, serious student, a most loyal son, and a serene companion, qualities inherited from his first mother. Named after John, “the disciple whom Jesus loved,” John will, I hope, be appreciated by the more voluble members of our household for the qualities that spring from a gentle soul.