Inspired by my battle buddy 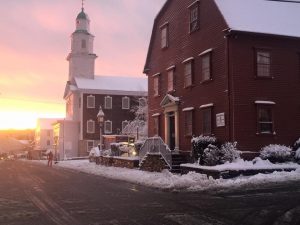 Three years ago, while living in New England, an incident involving my black German Sheperd, Bear, spurred my interest in writing.

After days of below zero wind chills, I decided Bear and I needed to get out of our clapboard cottage for a change of scenery. So, I called my friend, Nicky, for a puppy play date with her black rescue, Pepper. Once my kids got off to school, I loaded Bear in my truck and made my way down the snowy lane of the land trust we lived on. We passed the empty shores of Third Beach and drove east to the opposite end of Aquidneck Island and to Nicky’s quarters on the Naval base.

As soon as we walked in the door, the pups took off together while Nicky and I settled. She and her husband had a striking view of the Narragansett Bay, so we sipped coffee while gazing out the windows. The February ice was beginning to thaw, revealing patches of green between the snow mounds outside. Pepper had been chasing Bear around the tight corners of the coffee table, so we let them in the fenced yard to play.

With our mugs topped off, we become engrossed in conversation. Twenty years had passed since we had last been stationed together in Vilseck Germany. Our husbands’ careers had taken different paths but coincidentally were both assigned to the Naval War College. This was unusual since it is uncommon for soldiers to get a year “off” to work on their graduate degree, let alone at the Naval institution.

Nicky and I spent the morning catching up. She was like a big sis, giving me much-needed perspective as we talked about raising boys and helping them get established in the civilian world after multiple moves and different schools, and the impact of their dads being soldiers in a post 9-11 world. We worried about the long-term impact deployments and the high op-tempo lifestyle had on them. Military families struggled, with some of our friends making the ultimate sacrifice or dealing with suicide. Absorbed in conversation, we had an intuitive knowing of what the other was thinking and feeling as we worked through feelings spurred by memories.

Suddenly I noticed my phone buzzing in my purse. I went to check, realizing I missed numerous calls. Nicky said, “Pepper has been barking and scratching at the door for a while.” After playing the messages on my phone, I realized Bear had escaped the yard, with someone finding him running along the icy bay. Several individuals were trying to track me down but ended up dropping him off with a military policeman when they could not reach me. Thankfully, Bear had tags and was microchipped.

I returned the calls, thanking the people who found Bear. The first person told me he picked up Bear as he was running down the middle of the road. Bear had hopped right into his truck. “What a cool dog you have,” he said. “The thought crossed my mind to take him home with me.” I chuckled nervously, thanking him for making sure he got home. I hung up and Nicky and I looked at each other: What the heck where we are thinking. Grateful both pups were fine, I gave Nicky a hug and left to pick up Bear.

As I drove to the MP station my mind drifted to our first duty assignment in Vilseck when a similar escape occurred. My oldest, Danny, was two. We also had a Shepard and Husky and I had just taken the three of them on a hike. My husband was in the field and I did not want to wait until bedtime to shower. I figured I was clever buckling Danny into his toddler seat and putting on a Disney movie. I’ll be quick and leave the bathroom door open so I can hear if anything goes wrong, I thought.

But as I was rinsing my hair, I heard Nicky calling from downstairs, “Lizzy? Is everything ok?” I jumped out of the shower, wrapped myself in a towel, and made my way downstairs dripping wet. As I poked my head over the railing, Nicky was standing in the doorway with her eyebrows raised. “Danny is in the back seat of my car.” I could tell she was biting her cheek as she explained, “I was on my way to see you and found him running down the street chasing after your dogs.”

“What?” I mumbled while carefully navigating the steps. Next to the front door stood a dining room chair. Danny had wiggled out of his seat and dragged it across the room. He had positioned books on the seat to reach the metal latch located on top the door jam. My husband had put the lock at that height thinking Danny could never reach it. We thought we had done a sound babyproofing, but the hook was swinging loose. I did not know what to say. I stood shivering in silence while pools formed under my feet.

Nicky reassured me. “Don’t worry Liz. Get your dogs… I’ve got Danny.”

With her quiet support, I knew I had I gained a real friend that afternoon. And through her example, I also found confidence as a young mother during our first duty assignment. Those were the toughest three years for me as a military spouse, but what I learned from her and my other friends, set the tone for how I would handle future challenges. My short stay in Newport with Nicky also set the stage for upcoming transitions and my next phase of life.

Right before our husband’s graduated from the Naval War College, I accompanied Nicky to a doctor’s appointment. Army life during the longest war in U.S. history took a toll on her health. Her husband had been on numerous combat missions while she battled cancer. With grit and determination, she survived but was left with a chronic illness. Her doctor in Newport wanted her to try a new treatment, so she asked me to come along. While sitting in the waiting room, a nurse chatted with us, joking to ease our nerves. After asking how we met, Nicky shared some of our adventures. Right as the doctor called us, the nurse piped to me, “You should start a blog named, Pepper and Bear.”

“What a great idea.” I laughed. But after that hospital visit, instead of starting a blog, I signed up for a graduate program. Nicky inspired me to do so. She was achieving professional goals she had since Vilseck despite the challenges she faced. So, I decided to stop wallowing about not being able to pursue a career in psychology and instead begin a flexible career—writing. I had no academic background in the field but realized I built a knowledge base while attending five universities at various duty stations. So now, three years later, I have my MFA and am finally starting “Pepper and Bear,” – the compilation of a mishmash of academia, my experiences as a milspouse, and the encouragement from my battle buddy, Nicky.