How I learned history

How I learned history 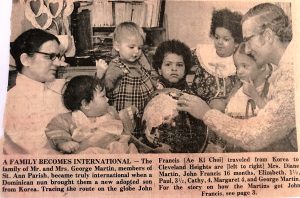 Positive memories of my childhood revolve around culture and history. My parents were educators, so my siblings and I were surrounded by experiences revolving around America’s earliest ethnic traditions. We are also a multi-cultural family, so I was not just exposed to the diversity of American principles—I lived it. However, it was not until I was a young adult, living on my own for the first time in an isolated location overseas, that the true complexities and grittiness of our nation’s birth became real for me. It was not until I was able to internalize the vivid descriptions of historical fiction novels I was reading, that I was able to grasp the cultural clashes and individual struggles of European colonists, Native Americans, and Africans brought here as slaves.

My earliest memory of learning U.S. history is as a four-year-old child. I remember the day when my adopted brother, John, from Seoul Korea, became a U.S. citizen.  I also have two other adopted siblings from different racial backgrounds and four biological sisters. My parents adopted John when he was about 1 ½ years old. He is the same age as I am, so we grew up as if we were twins. Getting prepared for John’s ceremony, my parents used a globe to explain where John was born and how he flew to the U.S. with a nun, Sister Blanche, to be part of our family.  They also explained to me and my other siblings how people from other countries immigrated here, including our great-grandparents. I distinctly remember my mother dressing us in traditional Korean outfits for the ceremony and having a large party afterwards.

Throughout my childhood my parents would frequently share stories from their childhood, including my mother’s vivid descriptions of growing up in a Czech tavern in an ethnic neighborhood in the inner city of Cleveland. The neighborhoods in the city were divided into distinct communities based on where the European immigrants came from. They were replicas of these countries in terms of language, food, dance, newspapers, with most of the people working in factories as they strived to obtain the American Dream. Or as my mother would say, her parents worked hard so they could live on “Easy Street” one day.

Besides storytelling, my parents emerged us in activities such as gardening, going to libraries, visiting farms, and exploring historic sites like Schoenbrunn Village, a 1772 Moravian mission among the Delaware Indians, and Hale Farm and Village, which was part of the Underground Railroad. We also spent days visiting the Cleveland museums. My mother would let John and I explore the museums for hours on our own—or at least she gave us impression that we had that freedom. It was my favorite place and I even spent time as a high school student doing an internship in the archaeology department of the Natural History museum. 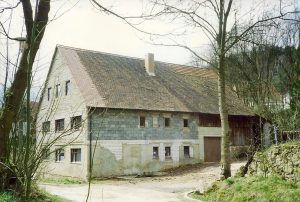 Despite the exposure to American history and culture I had as a child, I did not fully appreciate the difficulties or complexities of the social and political interactions during of cultures coming together for the first time in this country.  As a very young military spouse and mother, living in the tiny village of Unterklausen in Bavaria Germany, I began to realize how difficult it could be to adjust to a foreign country. Though we lived in a charming old farmhouse, and all our basic needs and comforts were met, there were modern luxuries we did not have, such as a phone, TV, drier, or computer. In addition, my husband would go to the field for extended periods of time. No one in the village spoke English, while I struggled to learn German. I did get a European license and car right away, but gas was very expensive, and I had to drive long distances to get to small shopping areas. And, even though Germany is western country, the day to day differences between German and American cultures was and is still striking. 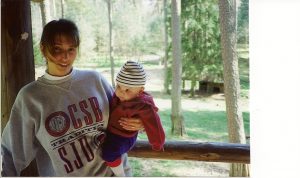 Elizabeth and her infant son, Danny, hiking in Bavaria Germany

I decided to make the best of my situation and spent hours delving into novels such as James Cooper’s The Last of the Mohican’s, Sara Donati’s Into the Wilderness series, and Diana Gabaldon’s Outlander and Drums of Autumn. I began to better understand the colonial experience, relating to characters through the minute details of day to day life and events of this earlier time through these narratives. My childhood ideals of this era were modified, becoming realistic and at times, gut wrenching.

As a young girl, being educated of historically accurate events was helpful in developing an awareness of our past, but I was too immature to comprehend the conflicts and hardships. Seeing displays in museums of Native Americans taking other tribes as slaves after a battle, visiting rooms and tunnels under old buildings in Cleveland that were once part of the Underground Railroad network, such as St. John’s Episcopal Church, and exploring realistic replicas of old colonial cabins still seemed like a theatrical world I longed to be a part of. It was having to be independent and responsible for a baby, while in a strange country and culture, with little resources and knowledge, and having to rely on strangers, that I began to value the individual experience and origins of early Americans. Being pushed of my comfort zone I gained a more sincere understanding of the struggles of Native Americans, slaves, and other immigrants who came throughout the centuries like my great-grandparents from the Czech Republic or my brother, John, from Korea.