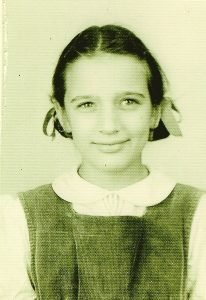 Diane ate in silence as she thought about her last year of Our Lady of Lourdes—the Catholic church and K-8 school everyone in her neighborhood attended. But not one of her friends attended Notre Dame Academy. Located on the other side of the city, the all-girls high school run by nuns, was an opportunity Diane had dreamed of. Though she missed her friends, there was one person she missed most, and that was Sister Callista.

Sister had been the only teacher who had laughed and played with the children, greeting them in the morning with hugs, and as they left for the day. She also taught them art, and how to sing in harmony. And on weekends, when Sister oversaw the liturgy in church, she invited her class to help.

So, Diane and her friends spent Saturday afternoons as children, in the gothic building’s sacristies and sanctuary. They would scrub the alter tiers, wash the statues, and when Sister was not looking, would chew on beeswax from candles. They had even looked for the wine, but never found it.

Despite any luck with the wine, Diane enjoyed taking on the most important job –caring for The Infant of Prague. The statue of baby Jesus had a chest of drawers filled with hand-sewn tunics, dresses, capes, and matching pieces of silk for his crown. Diane loved dressing him in all the appropriate, seasonal garments.

A sudden bang of a cast iron pan in the sink caused Diane to jump. She looked up to see her mother washing dishes as she stood up to leave. “Pekný deň.” Her mother called out.

Diane made her way through the ghetto. She stood at a corner waiting for the first streetcar to take her east into the inner city where she would catch the second car. The air was soggy with the wind coming off Lake Eric. Seagulls circled overhead. Businessmen also waited nearby but no one acknowledged her. They were busy reading newspapers.

Diane looked up to watch heavy clouds of mist pass overhead when she realized the birds were squawking at her. She glanced near her feet. Someone had thrown crusts on the ground. When she moved from the scraps they dove down, fighting over the remnants, tearing the pieces to shreds in seconds.

The streetcar arrived. She got in last. With her pile of books tucked under one arm and grasping the strap overhead with the other, she maneuvered herself so that her feet were far enough apart she wouldn’t fall. The car swayed back and forth and smelled like tobacco. Diane closed her eyes, thinking instead about how she loved going to school.

As the streetcar ran through the city, it stopped every few blocks to let the businessmen off. She was the only one left when the trolley reached the bridge on East 55th and then she switched cars to travel south into Cleveland’s largest African American community.

Unlike the first streetcar, the riders on this route were jovial. They shouted greetings and joked when they hopped on. The car jolted as it came to a stop near the high school, jarring Diane so hard, a couple of her books fell.

A young man reached down to pick them up. Diane thanked him, suddenly becoming shy when she noticed everyone looking at her. She was embarrassed. But after a few seconds, realized it was not her clumsiness they noticed. Instead, their gentle smiles showed warmth. It was not till later that she understood how she must have looked—a skinny girl, from the ethnically isolated slums of Cleveland, bravely carrying an arm full of books across town by herself.