Diane heard the sneers directed at her Czech community from outside the ghetto. But, when high school graduation came in May, she applied to St. John’s College in Cleveland anyway.

While cracking her knuckles, Diane’s mother had said, “Maybe you should stick with your own kind.” 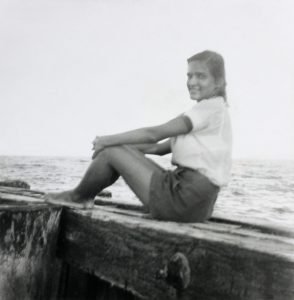 “But I want to be a teacher.” Diane had implored.

Diane’s mother knew her daughter worked hard and was on the honor roll, reading whenever she had free time. So, she agreed, but on one condition—that Diane promise never to move out of the tavern. Diane noticed the quiver in her mother’s voice, so she swore she would never leave.

The letter came a few weeks later. Diane saw the envelope with the emblem of St. John’s in the pile of mail. She let out a “whoop,” running up the tavern stairs and tearing open the seal.

Except as soon as she started to read the note, she realized the college was rejecting her.

She stood in shock. How did this happen? I was an honor student. I never got in trouble!

Diane barely noticed her brothers come in the room as she walked towards her own bedroom, letting the note fall from her hand. Once she reached her bed, she flopped on the pillows, burying her wet face.

Doors slammed. Footsteps stomped into the living room, paused, then continued louder into another room. Diane decided to investigate. She crept from the bedroom she shared with Baba, made her way through her brothers’ bedroom, and paused outside her mother’s room.

She peered between the crack of the door and wall, seeing her mother put on her best house dress. The white cotton frock had little blue flowers and zippered in the front.

Next, her mother sat on the bed, putting on long bleached socks and her brown oxfords with low heels.

Her mother rose. She looked in the little mirror above her dresser, brushing and twisting the brown strands into a bun which she clipped down with silver bobby pins.

Diane didn’t dare speak. Her mother’s jaw remained clenched while she put lotion on her arms and elbows, rubbing the moisture on the cracked skin and callouses.

She turned suddenly and with her voice shaking said, “Diane, you stay here with your brothers, I am going to see the admissions director.”

Diane’s hazel eyes widened. How is she going to get there? Mother does not drive.

Diane was the only one in the family who drove. She learned as soon as her father died, taking her mother and brothers everywhere. Plus, her mother rarely left the house. And when she did—never alone.

Her mother grabbed her fabric clutch that held change and walked out of the bedroom and down the stairs. Floorboards shook. The front door to the tavern closed with a bang.

She is riding the streetcar to St. John’s all by herself, Diane realized.