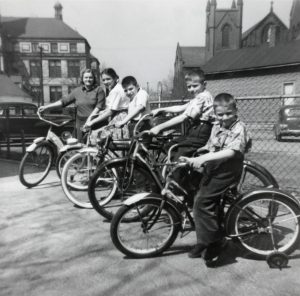 Diane with her mother and three of her younger brothers, Ed, Tom, and Jim. (Danny not born yet). Riding bikes in their backyard of their tavern home in Slavic Village, known as Little Bohemia in Cleveland Oh. Our Lady of Lourdes in background.

Once Diane discovered the library, she would read the books she checked out several times while waiting to get a new selection the next Saturday. One of her favorites was, The Moffat Family, by Eleanor Estes. The story was about a young, widowed mother with four children and their adventures during WWI. She must have read the novel 20 times before discovering Carol Ryrie Brink’s Caddie Woodlawn. The main character, Caddie was a tomboy growing up with her brothers in woods of Wisconsin. Diane would fall asleep rereading her favorite scenes, dreaming she was Caddie.

One March morning Diane woke wanting to recreate a scene she remembered from her dream of being in the Wisconsin forests. She barely ate breakfast, racing to dress in play cloths. Just as she was filling an old bucket with hot water to melt the ice from the dirt patch behind the tavern, she could feel her mother’s presence behind her.

“But I’m gonna… Maminka,” she pleaded as water splashed back into the basin.

She was about to make her case but saw her mother’s chin clench as she plunked the bucket under the sink. Diane knew she had no chance.

“May I visit Baba then?” She whispered.

“Jít…jít,” her mother muttered walking away.

Everyone, including Diane’s mother, called her grandmother, Moja Babička. But to Diane, she was Baba. And every day since her brothers were born, she visited her. Baba was Diane’s daily companion, her playmate, and her mentor. Diane would follow her around, mirroring her every move and begging her to tell tales, “Povec mne prepovitku.” 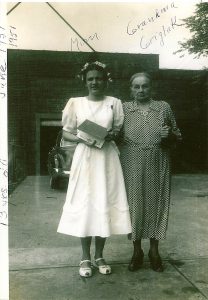 Diane dashed back upstairs to change into her favorite red skirt and matching sweater with a pointed hood. She did her own hair, brushing into two ponytails with matching ribbons. She pulled the dark locks forward over her shoulders, so they poked out on either side of the hood when she put it up. Then she joined her mother who was waiting outside.

The morning was damp. Diane’s mother took her hand, walking her briskly to the front of Our Lady of Lourdes. She waited at the corner until Diane went inside to join Baba who was already there—just like she was every morning.

Before climbing the staircase of the stone foundation, Diane glanced up to admire the round stain glass. The Virgin Mary was standing over the window, watching the Slavic Village called “Little Bohemia.” Above the graceful figure, the steeple rose so high, Diane couldn’t see the top. Just then the bells rang. The chiming sent mourning doves flying from the windows encasing the carillon. White wings fluttered, blending into the orange glow peaking over the brick buildings on Broadway. 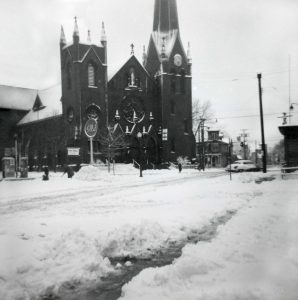 Diane took a deep breath and pushed the massive door open, inhaling incense, wax, and old wood. The door closed. The foyer was black. She could feel the weight of somber prayers as she tiptoed towards the dim light trickling through stain glass.

Diane crept past a crucifix, diverting her eyes. In typical Roman Catholic tradition, the statue was a reminder of Jesus Christ’s gruesome death. She glimpsed at the bloody corpse, before pulling her hood tight and running the rest of the way to the fourth pew on the right.

Baba sat in the same spot every morning. Diane scooted into the pew, slid along the wooden bench, and buried her face in the woolen overcoat filled with the scent of warm apple štrůdl.