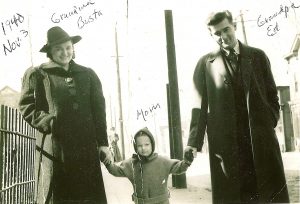 Diane woke early that Saturday morning. For breakfast she had a slice of rye bread with sweet cream butter. And for the first time—coffee. Her mother filled the stoneware mug, half with fresh steamed milk and half with dark roast.

Diane let the warm liquid touch the tip of her tongue. Earthy, spicy, creamy. Then, she nibbled the hearty crust … continuing to interchange bites of bread with sips of coffee. Her mother walked over from the sink to braid her hair and began singing:

You are my sunshine, my only sunshine
You make me happy when skies are grey
You’ll never know dear, how much I love you
Please don’t take my sunshine away

She continued humming as she took a red barrette from her apron pocket and clipped the braid just above Diane’s ear.

“Get dressed while I get the boys ready.” She said when finished.

Diane changed quickly so she could watch Eddie, Tommy, and Jimmy take a bath. By the time she peaked into the bathroom, her brothers were sitting in the tub according to height. Mesmerized by the sound of running water and toddler babble, Diane stood in the doorway as her mother shampooed her little brothers, bubbles floating in the air—just like Baba did.

Her mother took the boys out of the tub, dressing them in cotton t-shirts and corduroy overalls. Right before she finished, she poured a drop baby oil in her hands to style their wispy hair into curls that stood up on the top of their heads. Diane giggled at the sight of them. Then, she guided them down to the kitchen, one at a time, for breakfast. Baba had arrived to help and was finishing making their breakfast of scrambled eggs.

Diane could hear her mother singing again as she walked downstairs and into the kitchen:

The other night dear, as I lay sleeping
I dreamed I held you in my arms
When I awoke, dear, I was mistaken
And I hung my head and cried

“Ready?” her mother asked while tying her babushka under her chin.

Diane nodded and stood. She put on her red sweater and took her mother’s hand, holding it tightly as they marched out the tavern and down Dolloff Street.

“Pay attention to where we are going,” Diane’s mother told her at the traffic stop.

They crossed the street before heading down Broadway to their destination on East 55th. Leaves crunched underfoot as the sun’s rays fought their way through the low-lying clouds.

Suddenly, Diane felt butterflies in her stomach when she realized where they were going. Her mother was taking her to the library for the first time. 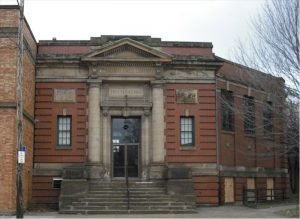 When they reached the Broadway Branch, her mother paused, allowing Diane to count the sides of the brick structure. She had to use her fingers to keep track.

She clasped her mother’s hand as they climbed the cement staircase to the front doors. They were so tall; they reached the second level of the building. Once inside, Diane’s mother helped her complete an application for her own library card.

“Go on.” She said, encouraging Diane to meander through the gothic structure by herself.

Diane ambled through the rows of bookshelves. Suddenly, musical scales began echoing from the building’s casements. The library’s venting system connected to Hruby’s Music Observatory’s air exchange system next door. Musicians were warming up their instruments.

The music grew louder, and Diane forgot girls weren’t supposed to run. She began skipping up and down the aisles until she caught sight of two great fireplaces, gasping in awe at the roaring flames.

It was not a frigid day, but the stone building was perpetually damp because of its location near Lake Erie. She took a deep breath, taking in the sweet, rich aroma of burning maple logs when she noticed one side of the library held all the English books, and the other section, Czech.

Another sign caught her eye though. Near the staircase a plaque read: Děti/Children. An arrow also pointed up. Diane didn’t think twice and scrambled up the wide wooden staircase. And as she scurried to the upstairs room, she ran her fingers along the smooth curving banister all the way to the top.

Once inside the story hour room, Diane sat with her legs crossed like all the other children. The librarian shut the light and walked to the front of the room, sitting in a chair in front of them. The kids were antsy.

Warm scented beeswax wafted through the room. There was no more talking. The tiny flame glowed brightly, illuminating the librarian’s face as she introduced a new author.

“And to think I saw it on Mulberry Street, by Dr. Seuss,” began the librarian. Engrossed through the entire story, the children clapped when she finished. Then she blew out the candle and turned on the light. The kids squirmed again, making their way to the children’s section.

Diane popped up too and skipped over to choose two books for herself.

Later, as she was walking home with her mother, she announced, “From now on, I promise to be responsible. I am going to watch traffic, cross both intersections carefully, check out books all by myself, and return them on time.”

Her mother smiled in response.

Diane kept her promise too. And for that entire week and every week following, Diane counted the days till Saturday.