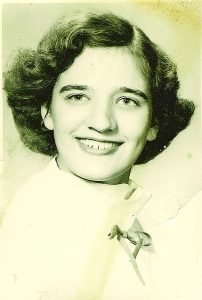 Diane’s mother was home before supper. She came into the tavern as Baba was serving chicken dumpling soup at the family table. She walked over with heavy steps and sat down. Her raw fists gripped the edge of the table as she let out a long sigh. “Diane, you are attending St. John’s in the fall.”

That was all she said.

Diane nodded, allowing a slight smile. She did not think she had an appetite, but once she tasted the broth, she downed it along with a second bowl. Right before finishing, she grabbed a slice of dark rye to sop up Baba’s Slovak dish.

That evening Diane decided to go through the dresses in her closet, thinking about what she would wear to her first class. The bells of Our Lady of Lourdes started ringing. Diane opened the window to better hear the chiming for evening vespers. The wind was coming off the lake. A draft drifted in –musty and old.

There was a quiet knock on the door. Diane’s mother walked in. Jergens lotion and fresh coffee also wafted in. She sat on the bed, asking Diane to sit next to her.

“I want to explain some things to you Diane.” She almost whispered.

“When I arrived at the admission office, they let me speak to the director right away.”

Diane’s mother continued in a low steady voice. She described how the director recognized her right away. “Your daughter is the Czech girl from the tavern I interviewed a few weeks ago. Right?”

Diane’s mother nodded. “So, why can’t my daughter go to college?”

The director replied in clipped speech, “Your kind of people do not persevere. Your daughter will not last. She will quit. And in the meantime—she will waste space that someone more deserving should have.”

“Diane is a hard worker. She deserves a chance too.” Diane’s mother persisted, eventually convincing the director to agree.

“Diane’s acceptance is conditional however.” The director had said. “I do not like the fact you and your daughter live in a bar. However, I will capitulate.”

Flustered, Diane’s mother began to explain what really went on in her Czech tavern. But the director raised her hand, stopping the exchange.

“This is the stipulation… Lisps are unacceptable. Therefore, if your daughter wants to attend in the fall, she will have to get rid of that accent. I don’t want one of our teachers sounding like she grew up in a slum.”

So that summer, Diane took speech therapy at Case Western Reserve University. She enjoyed being on campus of the world-renown school. Plus, she was thrilled to have the opportunity to attend college.

Years later, Diane imagined much more occurred in that discussion between the director with a perfect accent, and her mother, an ethnic businesswoman and widow with five children. But other challenges lay ahead for Diane after graduation. Once she became a teacher, she would break the promise she had made earlier that spring—which was never to leave her mother and the Czech tavern.