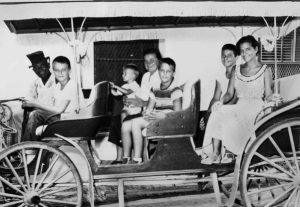 Diane with her younger brothers and mother, Stephanie. Ed is sitting next to Diane in the back, Jim is in the middle with Danny on his mother’s lap, and Tom is in the front.

The afternoon passed quickly. One of the sisters turned the record player down, allowing Glenn Miller to play in the background while the students gathered their belongings. Diane and her friends said their goodbyes with hugs as their teachers ushered them gently up the stairs and out the front doors.

The evening was not late, but the Cleveland sky was black with cloud cover. Diane would have to ride the streetcars home in the dark. She began her journey across the city, turning to see the school once more before reaching her stop. From a distance, she could see white habits bobbing up and down as the nuns barred the academy doors with chains.

When she arrived home, Diane went straight to the kitchen. Stacks of dishes greeted her along with the odor of stale cabbage. After setting her books aside, she went to work scraping the dinner remnants into a bucket and washing everything in boiling water. Next, she wiped the countertops before going into the tavern hall to clean tables. Her brothers would miss beer and tobacco stains when it was their turn to clean up. Her hands bled by the time she finished.

As she marched up the stairs to the living quarters, she heard her four younger brothers in the bathroom. There was a sudden slap and then a howl, followed by a raucous of laughter. The door flew open and they all ran past in their pajamas.

She grabbed the oldest three before they could wrestle each other to the ground. They continued to laugh but listened when she asked them to get their bookbags and sit on the couch. Without yelling, she soon had their attention. In minutes, Eddie, Tommy, and Jimmy started their assignments while Danny played in a corner with his trains.

The home was quiet as her brothers continued studying. Diane worked on her own studies. Barely breathing, she listened for their mother—not a sound from her room. Instead, she heard Baba humming from the washroom.

Baba lived with them now. And only Czech and Slovak folk songs echoed in the shot gun style hallways of the tavern. Diane no longer heard “Apple Blossom Time” and her mother’s favorites from the hit parade of the 1930’s and 40s.

Diane’s mother had stopped singing. The baby, Danny, was only a few weeks old that summer—the summer, their dad died suddenly.

Months had turned into years with Diane sensing a perpetual shadow over her mother. Not only had she stopped singing, she no longer talked to family and friends. Diane had done her best to help, working in the tavern, taking care of her little brothers, and studying hard in school.

But the shadow hung heavy and damp, covering the tavern like a winter fog rolling in from Lake Erie, blanketing roads and dimming the glow of streetlights.