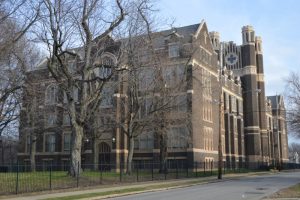 Diane walked the rest of the way to school. Look-out points rose above the trees as she approached campus. Notre Dame Academy looked like a castle on the corner of Ansel and Superior with its gothic structure and towers.

When she stepped inside the foyer, her loafers squeaked on the spotless floors. Tension eased from her shoulders while she stood at the entryway staircase. Her arms, still full of books, no longer felt heavy as she hurried to sunrise service. Diane imagined she was wearing ice skates, gliding through hallways, and passing under the casement windows supported by marble pillars. She swore she felt inches taller than when she left the tavern that morning.

She took a deep breath. Murphy’s oil soap wafted near the open windows. She was moving along the east side of the building. Golden rays radiated through the heavy fog, giving her a magical view of the Rockefeller Park system. The gardens extended miles to the Art Museum and Case Western Reserve. The park frequently hummed with teachers and students from nearby schools who used the space for recess and science projects.

Diane finally made her way into the chapel with the other girls. She didn’t mind mass but chipmunks outside the windows kept distracting her. They were chasing each other under the oak trees that towered over the ravine. A sweet aroma also caught her attention. Her stomach growled. Quickly, she wrapped her arms around her waist. She glanced sideways, noticing her classmates also holding their stomachs and sniffing the air.

Thankfully, the service was not long, so Diane and her peers soon discovered the fragrant source—hot chocolate and sweet bread. A treat before class, waiting for the girls inside the foyer. The sugary snack energized Diane, warming her thin frame as she sat in first period.

The curriculum was rigorous that day and every day for the four years of high school. But the nuns were so kind, when graduation came, Diane had not been surprised when students didn’t leave. Several of her classmates joined the convent instead of getting married or joining the work force.

At the time, very few women had careers. With limited options, they could become a housewife, a secretary, or a nurse. Some could pursue a teaching profession as well, which is exactly what Diane wanted to do.

When school finished that day, Diane dashed down the staircase to the basement. Dozens of the other students hung out in the spacious room where the younger nuns ran a snack bar. Tables and chairs full of students greeted Diane, along with music from a record player.

She bought a soda pop and Hersey’s bar, and plopped down with friends to study Latin. The study session did not last long. Someone put on Fats Domino’s record. No one could sit still. Rhythm and blues reverberated against the academy’s massive walls. So, the girls closed their books, and started Glee Club practice – singing and dancing until evening.