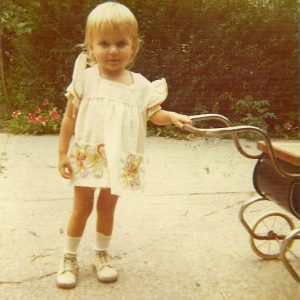 When the wind blows, the top of Elizabeth’s head looks like a haystack gone awry. Elizabeth laughs, then teases her hair with her fingers, when her older sisters smooth out those unruly wisps of hair. Below this wavy golden crown is a pair of round blue eyes, and two fat cheeks, like a chipmunk. She worked for her round rosy cheeks by nursing well into her second year.

The corners of Elizabeth’s mouth turn up in an impish smile, but her laughing blue eyes tell the real story of a beguiling, bewitching personality. Her demeanor is quiet, but she has an inner life of her own, that breaks out in unrepressed merriment when she thinks no one is looking. She walks with great dignity, putting one foot in front of the other like one who knows exactly what she wants, and where she is going. Her running is less smooth. She looks like a little old man trying to run across the street, as she goes bump, bump, hair flying, and legs twinkling.

On a winter walk, Elizabeth collects stones, sticks, pinecones, and dried-up leaves, and pockets them inside her little Eskimo jacket. At such times, when she is fully relaxed, she jabbers constantly about each object she has picked up. It takes a long time for us to stroll around the block in this leisurely fashion.

Elizabeth, Little Bit, Lillibet, Bess, Beth, Lizabeth, Betsy, how many nicknames for one little girl? The older children call her Lillibet, because she was so small for the first two years of her life, but her favorite name for herself is Lullu. Elizabeth is a Love Child, conceived and born after her mother’s tubular pregnancy. When it seemed, another child would never come, Elizabeth made herself quietly known. Both parents took part in the birth, and both witnessed her arrival. Shortly after birth, when her mother held her second born to her breast, her joy in her was without measure.

John and Elizabeth are seven weeks apart in age. Her slightly younger brother came (adopted from Korea) when Elizabeth was a year old. Eight pounds lighter and three inches taller, Elizabeth is the aggressive partner. At times, she does make his life miserable by snatching away his toy and running off with it before John has figured it out. He shrieks, but rarely goes after her. Until the day comes when john gives her a good sock, I’m afraid Elizabeth will dominate. When she is in a serious mood, however, they can communicate well and entertain each other with imaginative play. Their voices blend beautifully together, as they sing themselves to sleep.

George (her father) calls Elizabeth his “Little Prince,” after St. Exupery’s creation. Like the Little Prince, she is quick, determined, and elusive. She teases and evades when she doesn’t want to give a direct answer. The depths of her personality are complex, her bubbling laughter comes from an unknown spring. Her existence was a miracle to her mother and father from the beginning. She has never ceased to inspire awe and wonder in us, as we contemplate God’s gift of life.