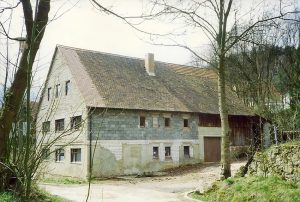 Our home in Unterklausen, Germany. Apartment on 2nd floor of 200 yr-old barn.

When I opened my eyes, I wasn’t sure if it was day or night. I couldn’t see anything—not a shadow or even the outline of my hand. The metal shutters eliminated any light and the only sound was the rustling of linens as I shifted on the old Army bed. The lack of sun kept the room damp, generating a scent of musty wood that perpetually hung in the air. I felt for the edge of the blanket before pulling it over my shoulders.

The chill reminded me of my in-law’s house in Minnesota where I stayed that winter during our first military transition. In less than a year Eric and I had gone from newlywed college students at the University of St. John’s and St. Ben’s, to the Infantry Officer Basic Course in Ft. Benning Georgia, to also being first time parents.

Eric had then flown me and our newborn, Danny, back to Minnesota to stay with his parents while waiting for our own travel orders. He went ahead to our first duty assignment in Vilseck, Germany.

I thought we’d only be apart a few weeks. Those weeks turned to months; long cold months until the Army finished our paperwork that April. But the night before I left, it dawned on me I knew nothing of where I was going or what I was supposed to do.

And after twenty-four hours of travel, no sleep, and too nervous to eat, I had made it to the Bavarian village, Unterklausen, with my baby boy.

When we had gotten off the plane, Eric laughed seeing how plump Danny had become and how thin I had gotten. He joked Danny suckled all the nutrients from me.

“No…the Army that already has,” I thought while forcing a smile.

My mind drifted back to the room I was in and the old mattress I was lying on. I had found a comfortable spot and didn’t want to move. My body felt like it had spent an entire day in the ocean swimming against pounding waves. I reached out, tapping the spot next to me…Empty.

I slid out from under the covers. With my arms extended, I shuffled until finding the shutter strap. I pulled the cord. Sparks of light lit the room. The delicate curtains hanging from the rustic frame brightened the 200-year-old renovated barn we called home.

I turned from the glare, and getting my bearings, studied the crib in the corner. The Army had lent it to us. Farm animals decorated the dark wood. Definitely 1940’s, I thought. 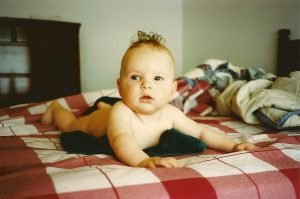 Danny was breathing softly as I peeked over the railing. He had a tuff of strawberry blond curls on top his head. He was a light sleeper, so I tiptoed towards the kitchen.

Each wall held rectangular windows, filling the wall space. With a turn of a handle, they opened sideways like a door. Or, I could pull the handle towards me, tilting the glass inward for a slight opening. With a tug and the sucking sound of a seal breaking, I tilted the kitchen window for a breath of morning air. 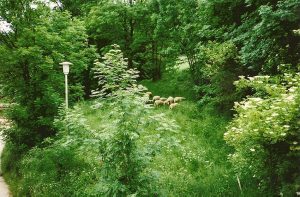 The sheep next door. Unterklausen, Germany.

Fresh earth wafted in. Sheep were grazing on the hill across from our upstairs apartment. They were at eye level on the other side of the single lane road. I did not want to eat alone—so the baas accompanied my own nibbling, while I mused over breakfast on how to explore with a newborn.

Leave a Reply to Liz A Cancel reply