Danny squirmed in his BabyBjorn. I shifted his weight so he could peer out over rim. I passed the farmhouse next door, a four-level home on a hill higher than ours. The old man who liked to talk about the war was standing outside next to his wood pile. He stopped what he was doing to watch me walk by. 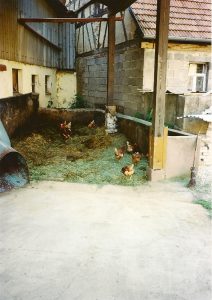 As I continued through the village, lace curtains flickered in windows. A few more houses down, a cowshed jutted into the path. The manure pit opened towards the road and its contents leaked into the mud puddles already spilling over the path in front of me.

I stopped for a moment to watch chickens strutting through hay strewed throughout the muck. The sharp tang of decaying matter trailed behind me as I circled to the opposite side of the road.

Just then, a girl on a bike glided by. She did not look our way but piped, “Grüß gott.”

I opened my mouth to reply but couldn’t remember this greeting in my translation booklet. She had ridden past, turned behind a house, and was out of sight before I could even muster an American, “Hey.”

I reached the intersection. A mustard colored home stood along the country highway. Blue checkered curtains moved inside the window. A sudden “mooooo” made me realize that this wing of the structure was a barn. 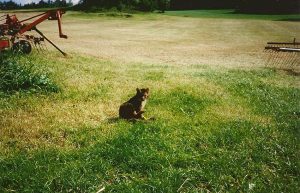 I paused…puzzling why the single stone building was both a barn and a house. An orange stripped kitten stepped out of the grass and stopped to scratch itself with a frazzled look. His amber gaze remained on me as I continued.

Just then the atmosphere unleased a squall. Danny blinked at the cold moisture without making a sound. I covered him with the blanket and pulled up my hoodie. The sudden gust had blown open a snow cloud. But the white gobs melted before hitting the ground and the bust was over in minutes. So, I continued.

In the middle of crossing the narrow highway dividing the village, I felt a man following me. I still couldn’t see him, but knew it was a man by the tone of the steps. I turned left instead of going straight. At a brisk pace, I walked down the paved route and away from the village. He had no choice but to continue across the street towards the other farmhouses. I held my breath and listened. No longer hearing the gait, I blew the air from my lungs.

There was little traffic on the winding highway. However, I knew cars would take the curves at a high rate of speed, so I decided to loop around Unterklausen by cutting through the forested hill. Our farmhouse was on the northwest side of the mountain—I remembered from the map I studied the night before. The grass was slick from the recent frozen moisture, so I took chopping steps at a diagonal angle.

Once inside the woods, I stopped to catch my breath. Danny was five months but carrying twenty pounds was a workout. I removed the cotton blanket to see his eyes. They were like blueberries, round and fully alert.

As we entered a cluster of firs, something resembling an old bench covered in moss leaned against a spruce. Most of it looked like it had broken away years ago, leaving the remaining portion bolted into a cement block embedded in the mountainside. The same pattern of remains covered the slope as my eyes searched the hillside. Never removed, years of weather and overgrown foliage had camouflaged the stadium.

“Hidden but not forgotten,” I said aloud to Danny and myself.

After climbing to the peak, a clear view of the parade field emerged below. I could envision farmers and their families, as well as soldiers sitting on freshly painted bleachers. Our old neighbor had told us the villagers did not like the Nazis. But, I wondered, how did so many do nothing to stop them. 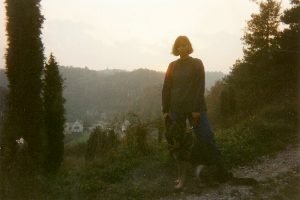 Liz, hiking with her German Shepherd, near the village of Unterklausen Germany.

I paused again, turning towards what was now acres of farmland, thinking about life then. What if I was a 21 yr. old German woman from a tiny farm village, my husband forced to enlist and fight far from home? I pictured myself, sitting alone on a green bench with my newborn—watching other soldiers, in formation with boots pounding, while goose-stepping alongside the armored vehicles that rolled over centuries old wheat fields.

A single chime from the village bell tower rang. Promptly, I looked over my shoulder, scanning the pines swaying slightly in the breeze.

“Only the wind,” I murmured to Danny, before setting out to find a direct route home.

About ten minutes later, I was on the opposite side of the hill trudging through tall grasses. I couldn’t see them but could smell my breakfast companions as the breeze picked up from the northwest side of the meadow. The sheep greeted me with bleats when I reached their pasture.

“There’s our barn.” I blew the words through my lips as I slogged down the hill past my fluffy friends.

Upon reaching the stairs of the ancient foundation, I continued to move quickly, kicking off my muddy boots in the vestibule. And then, just like a sure-footed goat on a steep cliff, I climbed the steps up into my apartment with my precious load. Logically, I knew the ghostly sensation following me was either curious neighbors or my imagination running wild about past wars and soldiers. But once inside, I locked the door and shut the shutter so it looked like nightfall.

The thick tile floor did not offer up any creaks as I walked into the kitchen, but the ceiling’s wooden beams let out a groan… I turned on the radio.

I couldn’t believe it. I Can See Clearly Now was on again.

I shut it off, bringing my baby into the bathroom with me so we could clean up. With a loud, “click,” I bolted the bathroom door behind me, hoping Eric would be home sooner than planned.