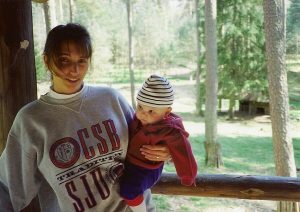 Before my arrival, Eric had furnished not only the bedroom, but kitchen as well, also buying European coffee, fresh dairy products, and bread from the Bäckerei. I chose another brötchen with an assortment of seeds, buttering it generously. Slowly chewing the crust, I watched the sheep make their way down the meadow. I sipped my café au lait and thought of the discussion I had with Eric the night before.

He was going to be home early that night. We had one car and no phone, and it would be three months before we had service. I needed to know where the phone booth was a few miles away. After touring the area, we would then go to his unit for a Family Support Group meeting. I would learn about Bradley Fighting Vehicles and have a chance to meet spouses.

My throat felt too dry to finish the bread, but I managed my coffee. The breeze changed directions. A chill slipped through the windows along with the odor from the herd’s grassy snack. I shut it. The room was silent. I looked around, reconfirming the fact we had no books, magazines, or newspapers—no TV either.

Our household goods would not arrive until summer and even when they did, it wouldn’t matter. There no English channels. Eric had bought a small 230 V radio though. I found it in a corner and set it on the table. After minutes of scanning through static, I found a channel playing American pop music to accompany me while I did chores.

From where I was standing, I could see the clothes I had laid out the night before hanging over the couch and radiators in the living room. We had a washer, but no drier. Our landlords told us a contractor would deliver it any time within the month. However, if we were not home when they came, they would not leave it. We had two chances. As I began to fold laundry a reggae version of, I Can See Clearly Now, came on:

I can see clearly now, the rain is gone,
I can see all obstacles in my way
Gone are the dark clouds that had me blind
It’s gonna be a bright (bright), bright (bright)
Sun-Shiny day.

“Pffft,” I snorted, and was about to change the station when I heard a loud coo. I went straight to the bedroom instead.

I stoked Danny’s curls as he nursed. He looked at me with an alert, steady gaze the whole time while I hummed his favorite nursery rhymes.

“Ready to explore?” I asked as he finished his own breakfast.

The old farmer next door had come over when Eric moved in, talking to him about the war. He didn’t speak English, but Eric knew enough German to understand during WWII, Unterklausen had been a Gestapo hangout. The surrounding fields had once been parading grounds and stadium remnants still dotted the hillside next to our apartment—the same one with sheep grazing. And on the outskirts of town were caves SS officers hid in when the Allied Forces came through.

I was eager to see if I could find any remaining evidence as I dressed in jeans and my college sweatshirt. Next, I bundled Danny in a blue jumpsuit and hat and tucked him in a carrier that wrapped over my shoulders and around my waist. At the last second, I grabbed a receiving blanket before maneuvering down the brick staircase outside my apartment. There were no railings and no wall on the far side. It would be a straight drop to the cemented floor below if I slipped. 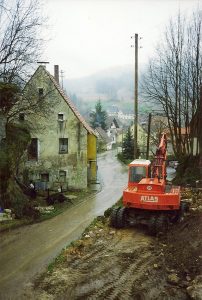 Spicy pine and decaying matter hung in the mist as I stepped out of the stucco doorway and into the muddy path. The air was clammy, but the sun was poking through the honeycomb shaped clouds, reminding me of burnt marshmallows.