A little story about Bear

He picked me I didn’t choose him.

When we arrived, a stocky farmer greeted us. He didn’t speak English, but Eric knew enough German we were able to communicate as he led us to the barn yard.

Fresh straw wafted in the frigid air as we stepped into the fenced area. 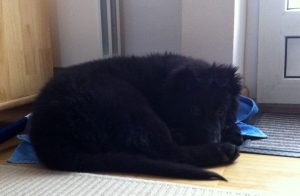 With tails wagging, German Shepard puppies greeted us. Balls of fluff gathered round our legs, circling, and fumbling over each other. To access their reaction, I picked up a piece of rawhide hiding in hay and waggled it in front of the pack.

An all-black pup bounced up to me, snarled and grabbed the bone before I had the chance to pet her. She continued snapping at the other pups trying to play with her. The farmer picked her up, placing her into another smaller run next door.

Tan and white blurs of fur continued to jump on us while a taller, leaner pup approached Eric. Instead of jumping she sat. “What a smart girl,” Eric said. He asked the farmer if he could take her out of the barn yard to perform several assessments. Intrigued, the stocky old man agreed.

The pup was enthusiastic, following every command Eric gave, fetching, running up and down an incline and coming when called. Eric had brought an umbrella he then opened suddenly, using it to see how easily the pup would scare. Barley flinching, she sniffed it.

“What a smart dog,” Eric repeated, grinning. She followed him back into the barn yard, running full sped before coming to a sudden halt.

I called her and she came over but tore back to Eric and then again to me. Her tail wagged fast as she waited another command. “She is smart,” I agreed while scratching her chin. “But, I’m not sure I could manage her. She would make a great working dog— for the polizei maybe. I just think she’d get bored at home” 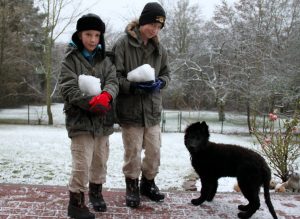 Bear with Joey and Sam

On to a new amusement, the pack of pups moved to a corner of the yard. However, a curious, lone pup toddled over to me. He was the only other black one. And as he nudged my leg with his nose, I bent to pet him. He stood still, looking at me, letting me pet his soft head.

“This one is calmer,” I replied.

He looked over to the one in the other pen that did not get along with her pack.

I looked back down at the chubby pup who was studying at me.

“I’ll do the puppy test with him Lizzy,” Eric said scooping up the pup who looked like a bear cub. He ran through the assessments at a slower pace but passed with flying colors.

Eric placed him in my arms, and I pulled him to my chest. A fresh scar shone in the moon that had just risen in the early evening winter sky. “What happened,” we asked.

With hands the size of baseball mitts, the farmer gestured at the pup separated in the other pen.

“I’d like to take this guy home with me,” I replied.

“But you need a girl,” he repeated.

And after filling out a small stack of paperwork, we shook hands and exchanged Euro for a fluffy, black, pup I called, “Bear.” 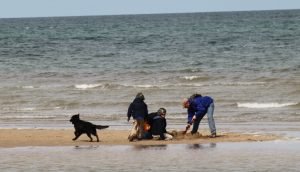 Bear and the guys on the beaches of Normandy

Bear spent our last months is Europe sledding with our younger sons, going on adventures in Wiesbaden with our oldest, and running through fields of tall grasses with my girlfriends and their dogs. He went with us to France where he did reenactments on the beaches of Normandy with the boys and met a beautiful lab at a medieval farm’s bed and breakfast.

He handled the trip across the Atlantic with ease, helping us settle in DC as Eric left for a deployment, and Dan to college, all while comforting Sam and Joey as they said their goodbyes to people and places they loved. 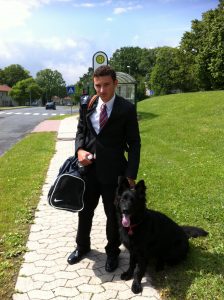 Always on duty, he guarded us, accompanying me on daily hikes and continued to execute his mission on another move to Rhone Island and life on the Atlantic beaches of historic Newport.

On our next move to the deep south in Georgia, he maintained his worth as only a good dog can, inspiring my new career as a writer and supplying unconditional love.

Through his 8 ½ years Bear was a playmate and companion, providing protection on every level—especially as a devoted friend as our kids navigated the stormy waters of teen years, multiple middle and high schools, and new everything as Army brats. Bear was their constant through struggles and long nights, and especially the heartbreaks, as well as triumphs. 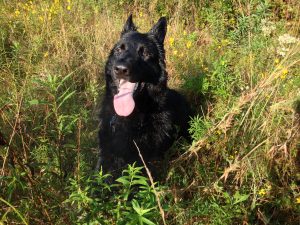 There is nothing we could have done to thank him, other than reciprocate. The pandemic in its weird way, helped us do so. Everything shut down and everyone came home, enabling us to be at his side till the end.

It was difficult watching his condition quickly deteriorate six months after his diagnosis and it has taken exactly two months for me to write this. June 6th. The day we said goodbye.

But I don’t want to focus on the sad. Instead, I want to think about how dogs add to our lives, even if for a brief time. And for our kids to remember… 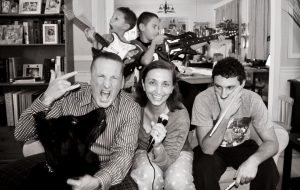 Bear stealing tennis balls, fitting four in his mouth at a time, tackling too hard when wrestling, popping every rugby ball, and biting girlfriends’ braids, splashing through mud puddles, and insisting on lying down while eating…Even getting into a couple dog fights—despite outnumbered. And just being the best friend, any boy (or girl) could ever want.